Royal Conservatoire of Scotland graduate Krysty Wilson-Cairns is one of the most-talked about new voices in film ”¦ and her star is rapidly on the rise. By Dr Andy Dougan. Photography by Robert McFadzean.

Being blacklisted is normally the kiss of death in any industry but it turned out to be the key to big screen success for Royal Conservatoire of Scotland alumna Krysty Wilson-Cairns.

Krysty graduated from the former BA Honours programme in Digital Film and Television in 2009 (BA Filmmaking). Now, she is the toast of Hollywood.

It overlapped with Last Night in Soho, which she co-wrote with acclaimed director Edgar Wright, which is due to hit cinemas this autumn.

Earlier this month, it was announced that Krysty will co-write the new Star Wars movie, with Oscar-winner Taika Waititi.

But all of this traces back to 2014 when her sci-fi script Aether was named in The Black List, the Hollywood list of the best unproduced scripts of the year. There were 70 scripts on the list that year but Aether was in the top ten. This was the calling card which started opening doors and led to Krysty taking important meetings with high flyers on both sides of the Atlantic. “It took my career out of the UK, where I would have always struggled,” she says.

“I was writing big budget high concept movies and they aren’t often made here, and certainly not by unknown, untested, young female writers.”

The script was read by John Logan, the man who wrote Gladiator and Skyfall, and on the strength of it, he hired her as a writer on the TV series Penny Dreadful, which Sam Mendes’ company produced, so it brought her to his attention too.

“I have so much love for that script,” she admits of Aether, “even though when I read it now I cringe because I would change so much of it.”

“I do feel like I’m playing in the big leagues now, mostly because sometimes I’d be at dinner with the 1917 crew and I’d be the only one at the table without an Oscar,” she laughs.

But having made it this far, Krysty is well aware that the trick is to stay there. However, having two major films not only shooting back to back but overlapping, suggests she may be doing something right. And, she admits, so much of what she has become stems from her time here at RCS.

“RCS didn’t just prepare me for my career, studying there opened my eyes and showed me what my career could be. It gave me my career ”” I had no idea I wanted to, or in fact even could be, a screenwriter before I was set that first writing task for the class. That was the ”˜eureka’ moment for me, I was shocked that this could be a job, because it never felt like work.

“I would be remiss if I didn’t mention the History of Cinema lessons,” she continues. “An education in filmmaking is so much more than ”˜here’s a camera and here’s how it works’. It’s about learning a craft of course, but it’s also about learning its history.

“Being pushed out of my regular viewing comfort zone, being forced to evaluate my own taste in films and TV; that really opened my world up. And it started a passion for older films and things out of the mainstream that has really served me well over the years.

“The best thing about those classes was that there was no dismissing of the mainstream, there was no belittling it. And I think that’s an important thing that many other courses lack. I was never made to feel stupid for loving Charlie’s Angels II: Full Throttle.” 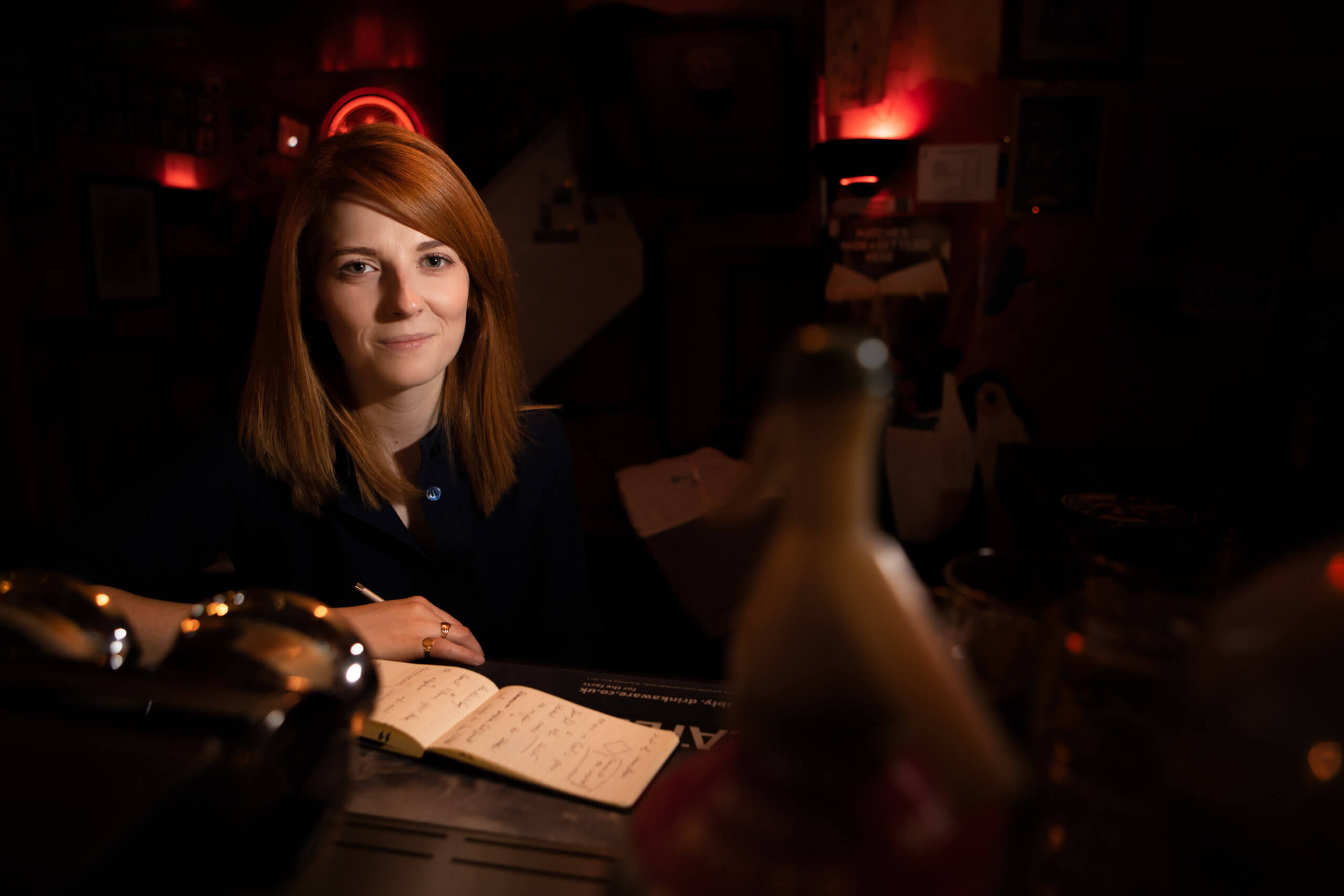 Krysty in the Toucan bar in Soho where she wrote her first script while working behind the bar. It was also used a location in Last Night in Soho, which she co-wrote with director Edgar Wright. © Robert McFadzean

Krysty’s studies at RCS not only expanded her cultural horizons, but also gave her a sense of confidence in her own tastes and an ability to think critically about them.

“The RCS prepared me not only as a technician, but as a scholar and a connoisseur,” she says. “It gave me the tools to understand the kinds of films and shows I want to make, not just how to make them, which in my opinion is more important.” 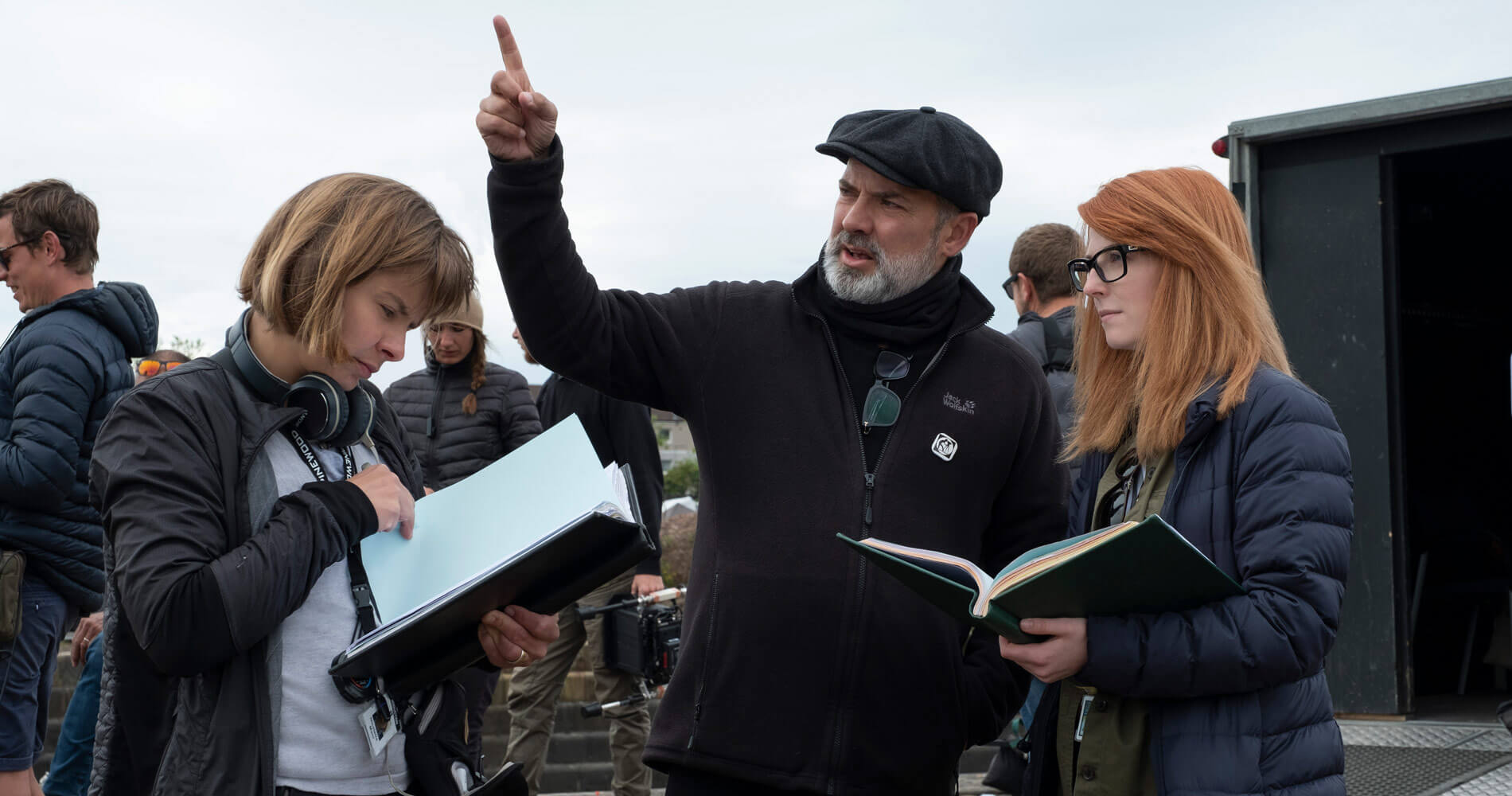 And what of those who want to follow in her footsteps? For Krysty there are three key words; listen, collaborate and finish.

“If you want to be a writer, nothing will serve you better than listening. Listen to everyone. To the people you work with, to those who hire you, to your collaborators, to the runners. They all have something of value to you,” she explains. “And learn how to collaborate. If you can’t be a good collaborator, save yourself a huge amount of headache and heartache and do something else.

“Also, if you want to be a serious writer, you have to be a finisher. You can have a thousand ideas, but if you don’t have one finished script, you don’t have anything.”

This is a revised feature which first appeared in Review, the Royal Conservatoire of Scotland magazine.

Interested in studying film at RCS? Find out more about the BA Filmmaking course, the Junior Conservatoire and Short Courses.