A new podcast series exploring the diverse voices of the African diaspora has been launched by the Royal Conservatoire of Scotland today (Friday 21 May) on World Day for Cultural Diversity for Dialogue and Development.

The i-DARE podcast series (Identity, Dialect, Accent, Race Explored) is the creation of BA Acting student Essa Vilanue and Voice lecturer Hilary Jones, who joined forces to highlight the diverse range of African dialects and accents within the RCS community.

The six-part series features interviews with students and alumni from across the School of Drama where they share their lived experiences and their fascinating journeys to using their voice in performance.

Essa Vilanue, who is currently in the second year of the Acting programme has been studying remotely from California during the pandemic. Lockdown gave her an opportunity to research her interest in accents.

“I’ve always been fascinated by accents and dialects, and the Centre for Voice in Performance at RCS has allowed me to indulge my interest even more. Quarantine gave me the time and space to focus my energy on this podcast series and I was fortunate enough to have really positive responses from students across the conservatoire.

“It’s important that there’s a range of dialects included in the series – there are so many colours to African accents and each voice is unique to a person’s identity.

“What we have created is a learning resource for anyone curious about accent work and who wants to discover more about the lived experience of people of colour through their voice. My hope is that this helps people feel comfortable and confident to explore their voice and not feel they need to conform to any other accent or dialect.” 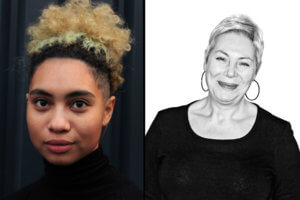 Hilary Jones, Lecturer in the Centre for Voice in Performance, was motivated to create this collaborative series after reading an article which examined how accents spoken by people of colour were often ignored or given lesser status.

“As teachers at Scotland’s national conservatoire, we wanted to read more, learn more, do more in the wake of the Black Lives Matter movement. This series shines a light on the extraordinary range of dialects in the African voice – many of which are spoken by our own students and the authenticity of each of those individual voices.

“The performers in this series are the future of the industry. They are quite rightly demanding more plays are written about their experience and seeing their voice represented on stage and on screen.

“For me, the i-DARE podcast is a celebration of those voices. Within the School of Drama, we have always sought to embrace the individuality of each student, and my role as a dialect coach has been to work with actors helping them explore the many factors that contribute to their accents, find their own unique voice and how to best use that in their craft. These podcasts are simply the next chapter in a very long story of how we value the diverse voices at the RCS.”

The project was funded from the Royal Conservatoire of Scotland’s Equality, Diversity and Inclusion Fund which supports creative initiatives from students and staff at Scotland’s national conservatoire.

It is hoped that the project will evolve  (into a screen project) next year with Shakespearean monologues performed in a range of African dialects , providing a further exploration and learning resource for applicants, students and alumni.

The first in the i-DARE series will go live today to mark World Diversity Day, with a new episode released every Friday for the next five weeks. The first episode features Daniella Faakor Damptey, a BA Musical Theatre student who discusses how her own voice has been influenced by the experience of living in Ghana, Croydon and Glasgow.

A new episode will be released each Friday and available to stream on RCS at Home. You can listen to the first one here.