Behind the Scenes of A Midsummer Night’s Dream 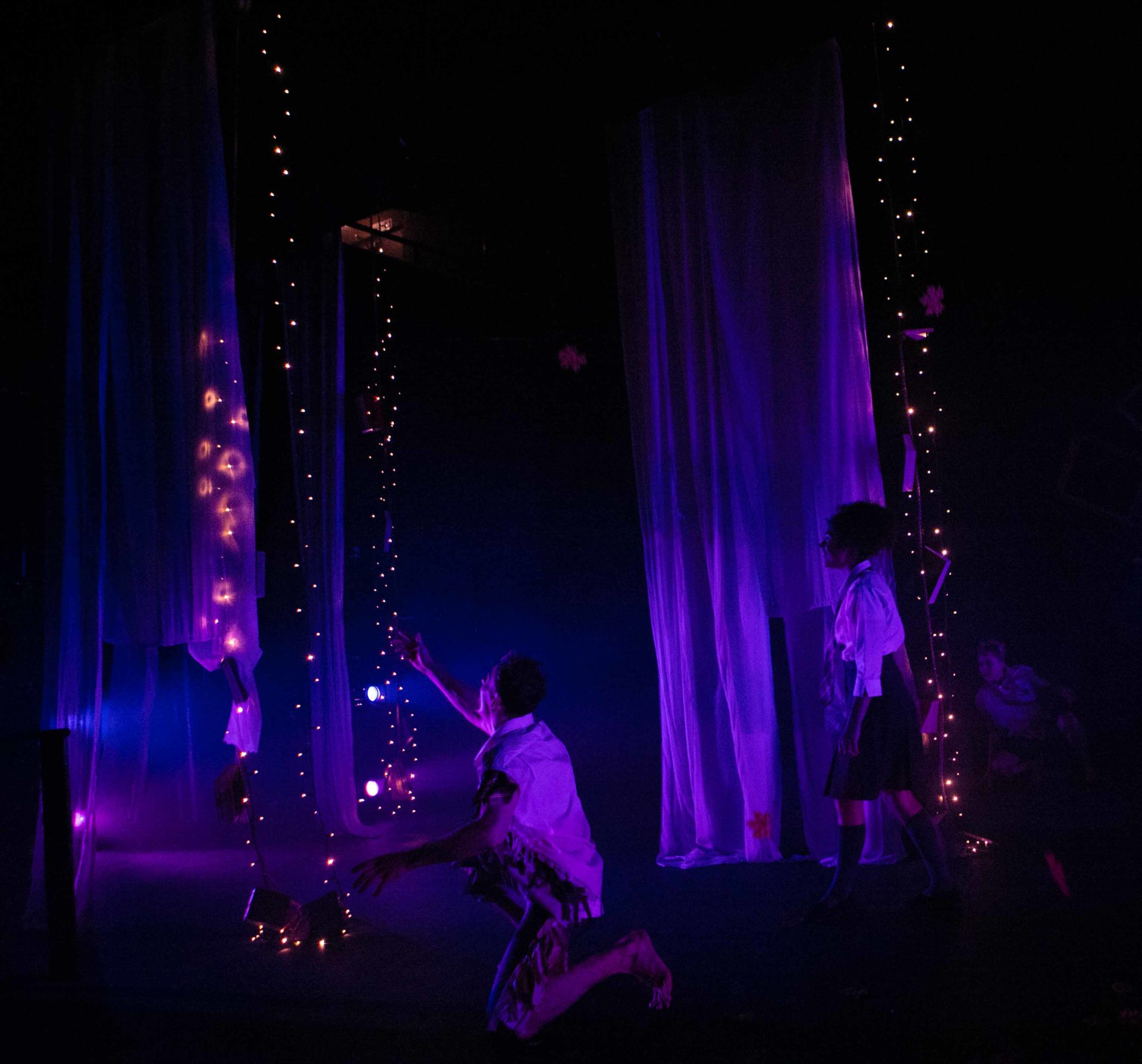 Earlier this year, our Chandler Theatre was transformed into an enchanted forest for our production of A Midsummer Night’s Dream by Shakespeare. All the productions at the Conservatoire are collaborative so whilst our 2nd year BA Acting students took to the stage, our 2nd and 3rd year Production students were working away behind the scenes to make the show a success.

We spoke to students Nele Haehnsen, the Stage Manager and Craig Stevenson, the Lighting Designer to find out more about the work they do in creating such a smooth running show.

A Midsummer Night’s Dream began in January, when did you start working on the show?

Craig: I began working on A Midsummer Night’s Dream just before the Christmas break. As the Lighting Designer, it is my job to light the performance in such a way that it matches the atmospheres and emotions which are being portrayed by the story. The lighting also has an effect on how the audience feels and where their focus is. I work very closely with the Director and Designer to collaborate and produce a fantastic show.

Whilst the show is running, are you working behind the scenes?

Nele: I would get to the venue about two hours before the show started and begin checking the venue and helping the assistant stage manager setting up the props in the right places. The actors would arrive about one and a half hours before the show to get into costume. The stage was made available for warm up before the movement call where certain movements would be walked through to ensure everybody knew what they were doing and that they were doing it safely. After a quick sound check of the instruments, the stage would be kept clear to allow time for other departments to do their checks. This allowed for me to do a final check of the props with the Assistant Stage Manager and to talk to the Front of House Manager, before we would open the house to the public.

Once the Front of House Manager gave me clearance and the actors were in their beginning positions for the top of the act, we were able to start the show. During the show I was closely watching the movements from the movement call and certain cues like the snow and leaf drop to ensure everyone would be safe.

Craig: Whilst the show is on, my job, theoretically, is done and I hand over to my team who then run the show on my behalf. They consist of a Lighting Programmer/Operator, a Production Electrician and their Deputy and one member of LX Crew. Their job is to make sure my design stays consistent throughout the entire run. They do this by doing regular rig checks to ensure everything is still working as it should. For example, replacing any burnt out lighting gel or a focus check to ensure nothing has moved position. The crew may also have some lighting cues throughout the show too. 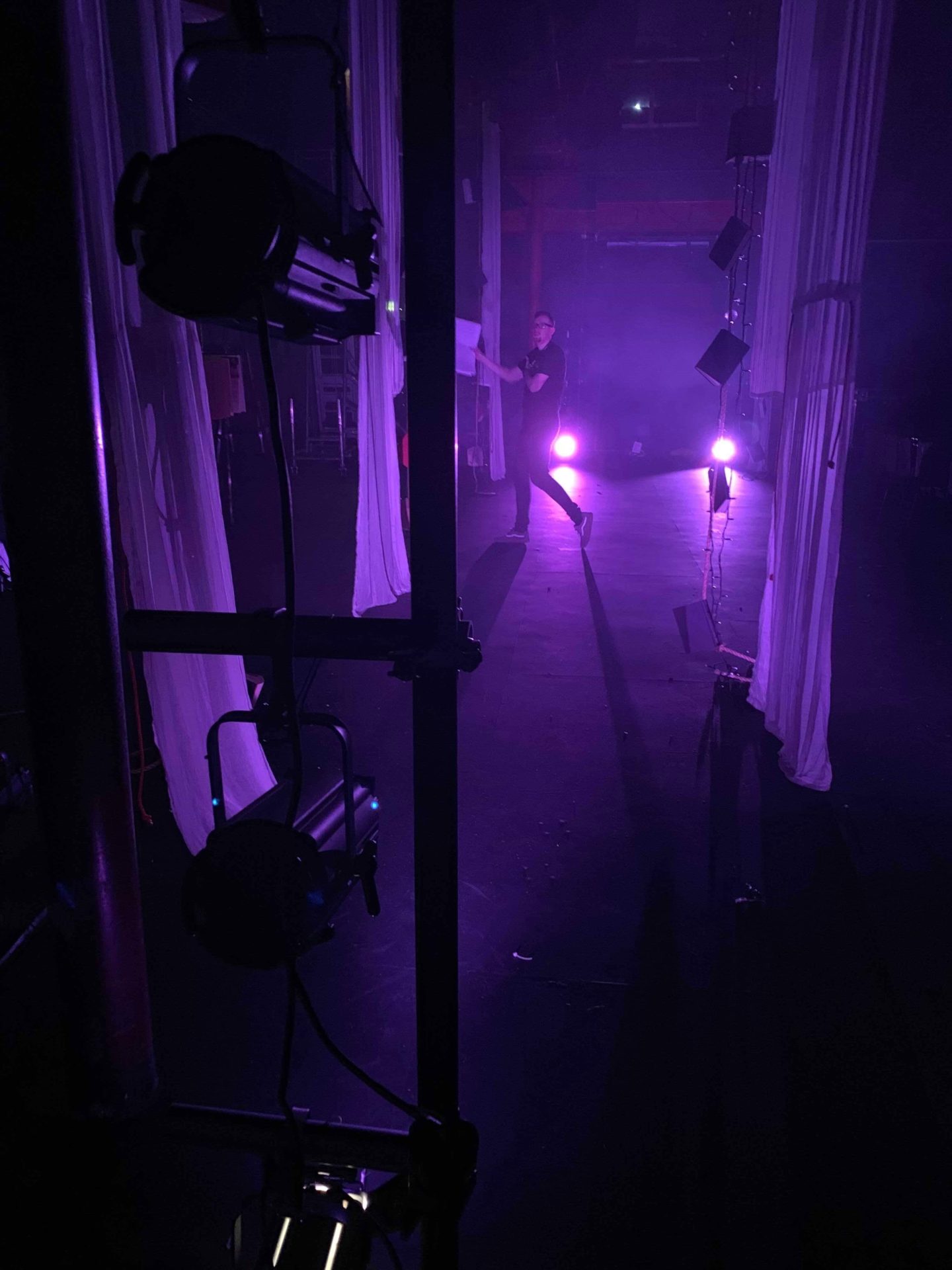 Photo taken by Production student Andrew, who was part of the Lighting team with Craig

Did you face any challenges whilst working on A Midsummer Night’s Dream?

Nele: A challenge that Stage Management faced was creating a potion for the show that could be changed to purple whilst still being safe to be poured on the actor’s foreheads. We tried out different substances and ended up using eye pigment/eye shadow as it was safe to use around the eye and would be pigmented enough to show up purple under the lights.

Craig: There weren’t many challenges that I faced whilst working on A Midsummer Night’s Dream. The entire production process from rehearsals through to fit up and the technical rehearsals went very smoothly from my point of view. All the production team worked very hard to ensure that the schedule was kept to in the limited time we had in the venue which in turn helped to ensure a smooth production process.

What have you enjoyed about working on the show?

Nele: I really enjoyed working with students from my year as it’s mostly second year production students and second year acting students working on this show. It is very rewarding to see the finished production as all the departments spent so much time working on it separately and it’s great to see what everyone else has been working on when it’s all coming together.

Craig: The thing I enjoyed most about working on the show was getting to collaborate with the Director Ali de Souza, the Set Designer Myrrin Hunter Urie, Sound Designer Neal Clark as well as the rest of the production team and cast.

Collaboration is such a big part of being at RCS and it is so satisfying to see the finished production on opening night after often months of hard work by many different people.

That satisfying feeling is one of the many reasons why I wanted to study production. Having a group of people all working together to produce one show gives you a real sense of joy and there is no feeling quite like it that I have found thus far. 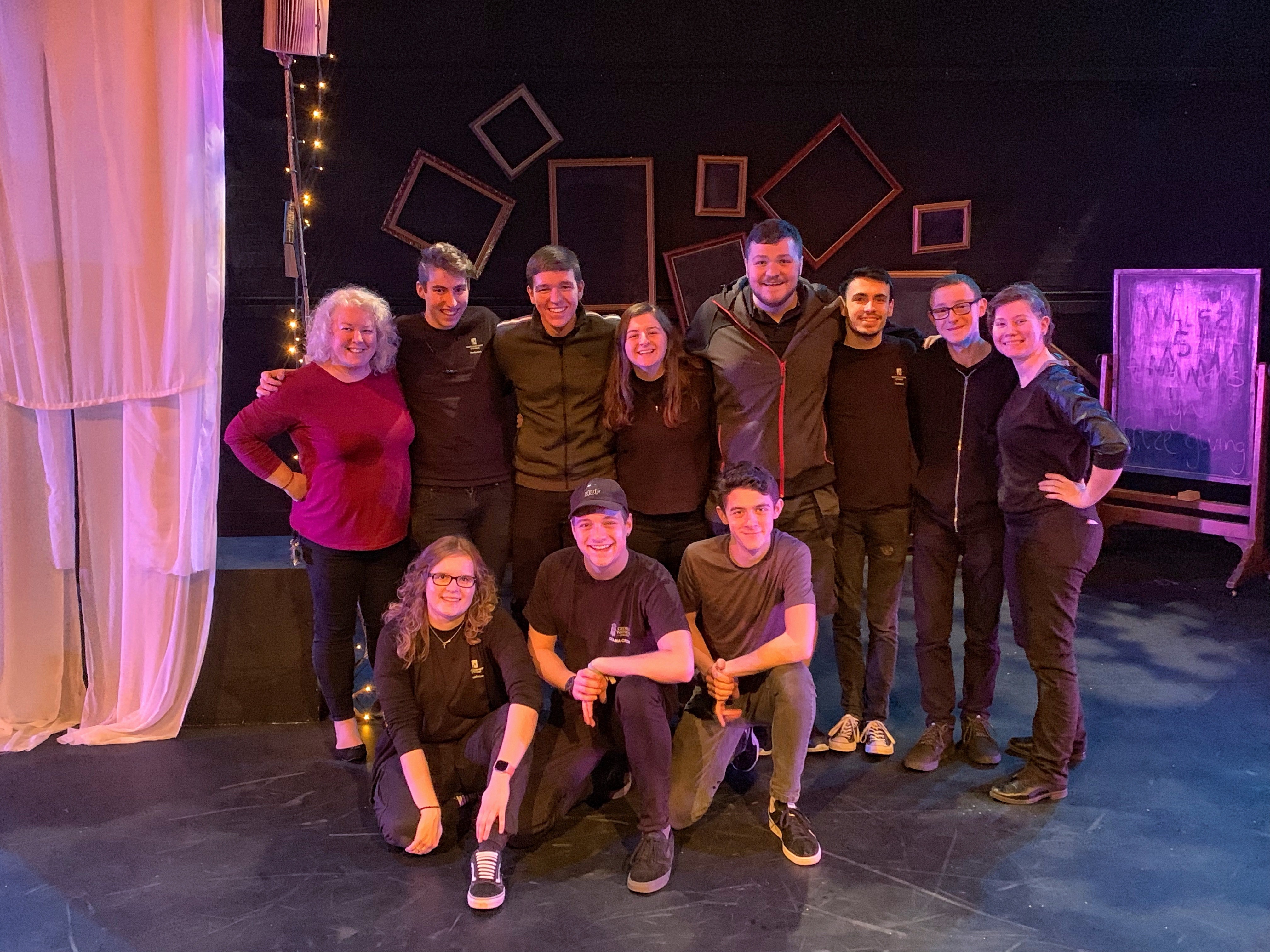 Which project has been your favourite so far?

Nele: Apart from A Midsummer Night’s Dream, I really enjoyed my two Assistant Stage Manager roles on The Breathing House this year and Spring Awakening last year. Being able to get to know roles in other departments throughout different productions was just as fun!

What made you want to study Production? What do you love about working on the production of a show?

Nele: I enjoy bringing happiness to people! It’s a hard job with long hours, but it is very rewarding when you get to see the audience enjoying the production as much as you have enjoyed working on it!

Craig: That satisfying feeling is one of the many reasons why I wanted to study production. Having a group of people all working together to produce one show gives you a real sense of joy and there is no feeling quite like it that I have found thus far.

What advice would you have for anyone looking to follow in your footsteps to study Production?

Nele: See as many different productions as possible and try shadowing people!

Craig: If you are someone who has any sort of interest in production and wants to study at RCS, my advice would be to get as much experience as possible in all areas of production so you’re not limiting yourself. The best members of a production team are those who can assist with many different departments as well as their own. Theatre is all about collaboration with others and without it, we would not be able to produce shows to the standard that we do.