Under the spotlight: Thomas Velluet-Draper 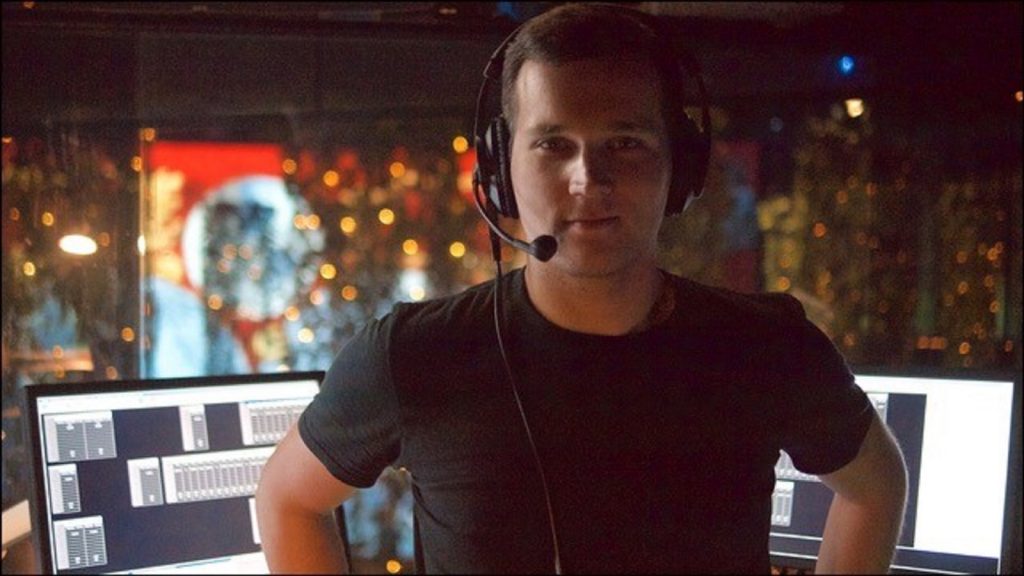 “If I had not studied at the Royal Conservatoire, I wouldn’t be doing what I do now” – graduate Thomas Velluet-Draper reflects on his studies at Scotland’s national conservatoire. The BA (Technical and Production Arts) alumnus graduated in 2011 and is now working on one of the world’s largest water-based shows.

It’s time for the 26-year-old, who hails from Ayrshire, to go Under the Spotlight…

Tell me about the project you are involved in at the moment.

TVD: I work on a show called The House of Dancing Water. It is based at the City of Dreams resort in Macau, an autonomous region on the south coast of China. The production is huge, one of the world’s largest water shows.

What is your position on the show?

TVD: My primary role sees me working as a show operator. There are six automation tracks that contribute to the running of the show. Five of those are at control consoles, taking cues from the stage manager or the riggers. The sixth is a more portable role, with the job of running around the building, troubleshooting any problems that may come up during the show.

How do you enjoy living in Macau?

TVD: Life in Macau is a bubble. It’s quite a small place, around 30 square kilometres but it used to be a Portuguese colony so there is an intriguing mix of Chinese and Portuguese heritage. There are more than 40 nationalities working on The House of Dancing Water. The really international cast and crew make for a fascinating workplace, which I love.

You joined a production which was already up and running. How long does it take to become familiar with everything?

TVD: It is really important to get up to speed quickly. The House of Dancing Water is well underway and is approaching its 3,000th show.

When new members of the team join, there is a brief training period where their skills are assessed. That’s where prior experience really helps.

You watch the show a couple of times to try and get used to it but in my case, I know I learn more by doing rather than watching, so then it’s a case of practising and eventually you are doing the show.

How do you reflect upon your studies at the Royal Conservatoire?

TVD: I loved my time at RCS. I was given the opportunity to try such a wide variety of tasks, everything from carpentry to rigging, and on many genres of production.

What highlights do you have from your time as a student?

TVD: I was technical stage manager for a Conservatoire production of Albert Herring, the opera by Benjamin Britten. That was good fun and I really enjoyed developing my skills as a manager. I had to be on stage in costume though, which I wasn’t too sure about at the time…

One of my particular highlights was spending a semester studying abroad at the California Institute of the Arts.  It was hugely rewarding, and I would recommend it to any student if they get the opportunity.

How has your career developed since you graduated?

TVD: The company which made the automation equipment for the Royal Conservatoire is called Stage Technologies.  They contacted me shortly before graduating and I later moved to work at their London office. That’s where the industry links really helped.

Before coming to The House of Dancing Water, I worked for Cirque du Soleil. Every time the circus moved, we had to pack up and bring everything out again at the next destination so it was a more manual role, but a great adventure.

How did you first become interested in the production arts?

TVD: I started at high school in Ayrshire. At assemblies and school shows, they needed pupils to work on sound and lighting. I thought it looked like fun so was keen to get involved. To begin with, I worked on sound and learned ‘on the job’. The more I did it, I more I enjoyed what I was doing and by the time I reached S5 and S6, I thought I was becoming OK at it!

My sister Emilie studied production at the Royal Conservatoire and graduated in 2009, so there must have been something creative going on in the family.

What sort of mindset is required to succeed in the production arts?

TVD: Our head of department says we are not paid for when things go right.  We need to be ready for when they go wrong, handling things as well as we can.

There are so many moving parts during a performance on a show like The House of Dancing Water. If little things happen, they can affect a lot of people. We run emergency scenarios regularly to ensure we are ready for anything – it’s crucial to stay calm under pressure. My mantra is: Slow is smooth and smooth is fast.

The ability to focus for long periods is important; it can be easy to get distracted. You also need to be very observant. If cast members are flying, for example, we need to be on the ball at all times ensure everything is ok – we need to be ready to step in if necessary.

What would you say to someone considering following in your footsteps?

TVD: For me, it’s all about the variety of projects you get to work on. I knew that I would never be suited to a 9-5 office job.

Naturally, we are working anti-social hours but that’s just part and parcel of the whole thing. I get to spend time with my colleagues, who I believe are the best people in the world. I wouldn’t have it any other way.