Under the Spotlight: Rory Boyd 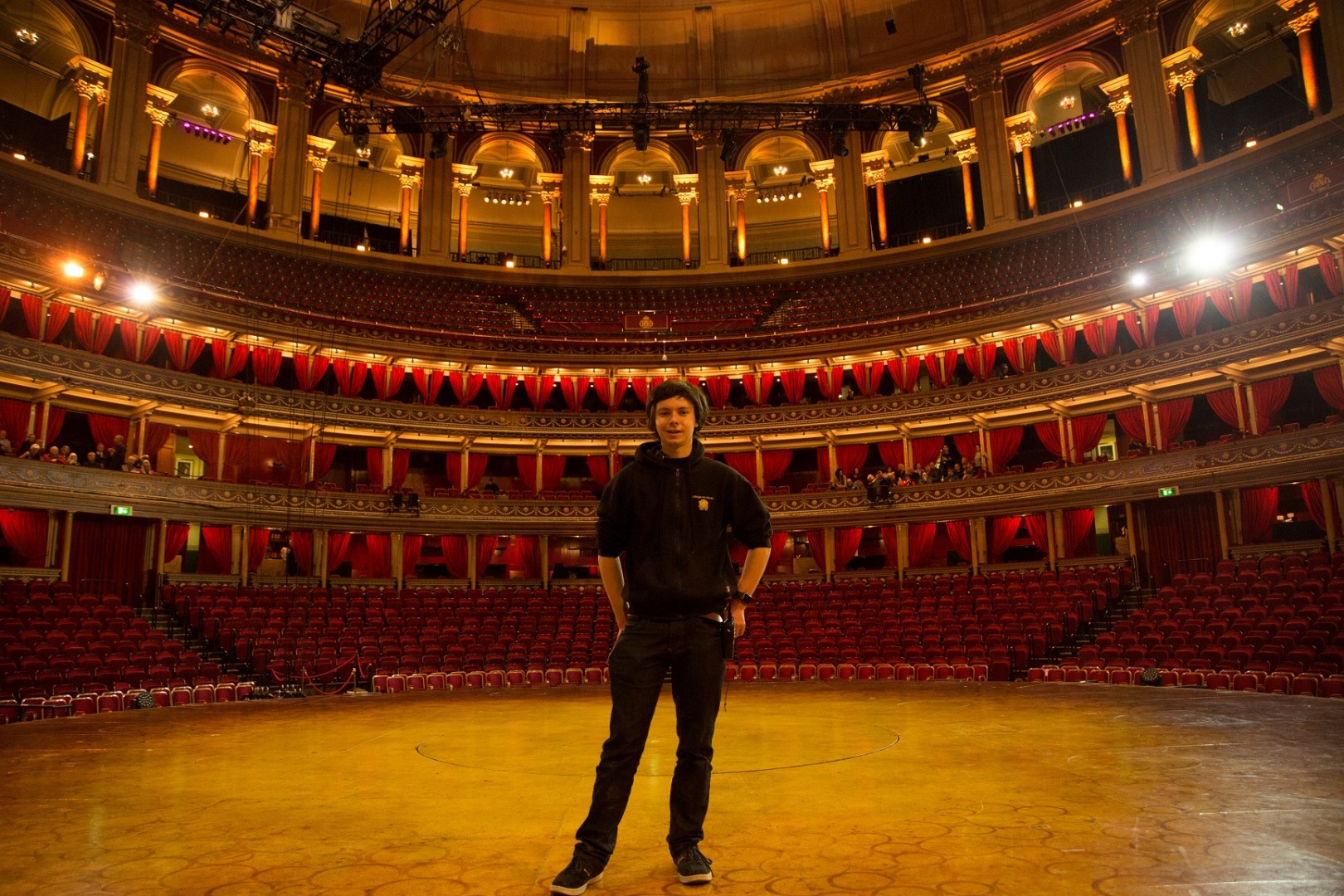 In 2014, Rory Boyd (BA Production Technology and Management 2016) sat watching a Cirque Du Soleil performance at the SSE Hydro. Now, the 22-year-old is jet-setting all over the world as an automation technician with the largest theatrical producer in the world.

Rory credits the Royal Conservatoire with providing the support, facilities and experience to succeed – read his story as he goes Under the Spotlight with Communications Officer, Mark Good.

MG: How are you enjoying working with Cirque Du Soleil?

RB: Working for Cirque is amazing. It is known all over the world for producing some of the most spectacular shows ever created so being a very small part of that is an honour. I work in the Touring Show Division – specifically on an arena show – which means we visit a different city every week, playing amazing buildings such as the Royal Albert Hall or the Barclays Arena in New York.

MG: Tell me about some of the places you have visited with your work. Do you have any favourites?

RB: Travel is one of the biggest parts of a touring show. A few weeks ago, I visited my 45th country – Poland. I’ve been everywhere from Russia to the Dominican Republic. Touring in North America and Europe is great but my favourite city so far has been Beirut. Being there for two weeks was an incredible experience.

Currently, we’re finishing up Ovo’s Russian tour, my second around the country. Recently we performed for eight weeks in London, which made it the first time in 18 months that I’d spent more than two weeks in the same place.

MG: What does it feel like to have gone from sitting watching a Cirque show in 2014 to being in the midst of the action?

RB: It doesn’t feel like long ago I was sitting in the Hydro watching Dralion. I had no idea that things would lead to working for Cirque when I was sitting there. In fact, our show Ovo uses the same stage.

The past few years have been a real whirlwind, from getting offered an internship, a temporary position, then a full-time job here.

MG: What does your role as an automation technician involve? Are you working with a big team?

RB: We tour with 100 people on Ovo, representing 22 nationalities. Our technical team consists of 23, spread over seven departments. Only two work in Automation. We take care of and look after everything that moves in the show, from winches to turntables, lifts to giant 20ft flowers. Every week they need to be set up, inspected, calibrated, maintained then packed up again six days later.

Automation involves a multitude of different skill sets which include electrical, mechanical, hydraulic and pneumatic, electronics and programming. A large part of the average day is spent with our stage managers and artists, programming changes and improving their acts during training.

MG: How complex is a ‘typical’ show?

RB: It might sound strange but the show can be different every night. This depends on artist workloads and how the cues are dispatched between them. It really keeps us on our toes and makes sure we don’t become complacent. In a ‘normal’ show, we usually fire around 120 Automation cues which can do anything from spinning a turntable to flying performers 30ft in the air. We control 28 objects – what we call axes – during the show. It takes around four weeks to learn how to fully operate Automation for the show. For our load-ins and outs, we hire around 100 extra local helpers to assist us with building and striking the stage. The build usually takes around 12 hours, with the load-out taking three.

MG: What’s the best thing about working for an organisation like Cirque Du Soleil?

RB: Getting to travel the world while doing an awesome job. Cirque is known all over the world so even in random bars in Kazan, people are interested in what we do. Like most large tours, we work in legs. Typically we work 10 weeks on then two weeks off. We usually only work five days a week on tour, which gives you some time to explore a new city. I was also lucky to have been sent by Cirque to the HQ of Tait Towers – the world leaders in creating touring shows – for advanced Automation Training. You also get to work with people who are at the top of their fields every day, be it a carpenter or an acrobat, which means you’re always learning new skills.

MG: How did you come to have an interest in all things backstage?

RB: I started working on shows in high school. Every year we’d perform a different musical. I tried most roles, from onstage to band, and ended up landing on backstage. I applied to RCS hoping to study lighting. It was halfway through my first year when I discovered Automation then things progressed from there.

MG: How did you enjoy your time at the Royal Conservatoire?

RB: RCS was an incredible experience. It’s a place where you can try new things and meet like-minded people across lots of different disciplines. The opportunity to get three years of hands-on experience in the industry before graduating is invaluable and crucially, without worrying about the repercussions of making mistakes. The more you put in, the more you get out and I had a great time.

MG: What were some of the highlights from your student days?

RB: Bridge Week was a real highlight. It’s a week where students can pitch for pots of money and resources to develop ideas and projects without being assessed on it. During that time we created Project 360 which was a 360-degree projection theatre that hosted new musicals, plays and recitals. We also worked with world-leading AV, video and camera companies to create it. Other highlights have to be working on the large musicals. Every year they just get bigger and better. I was lucky enough to be the Technical Manager of Cabaret in my final year and was really proud of what everyone created.

MG: How did your time at RCS help equip you with the skills to be an automation technician for Cirque Du Soleil?

RB: RCS was the first and one of the only universities with an automation system. Getting hands-on training during studies then using those skills during productions is something you won’t get elsewhere. You also get the ability to learn the whole production process, working with Production Managers and Directors. Teamwork was one of the main things – I will always value the approach I learned during my studies at RCS.