An internationally celebrated composer, singer-songwriter and educator, described as ‘the renaissance woman of contemporary British music’, was honoured by the Royal Conservatoire of Scotland in its summer graduation today.

Errollyn Wallen CBE – a Visiting Professor of Composition at RCS – received an honorary doctorate in music for her illustrious and multi-award-winning career with its prolific cross-genre output that spans everything from opera, orchestral and dance to film and television.

Errollyn’s body of work includes twenty-two operas and a large catalogue of orchestral, chamber and vocal pieces which are performed and broadcast throughout the world. She was the first black woman to have a work featured in the Proms and the first woman to win the Ivor Novello Award for Classical Music.

As a broadcaster, Errollyn has made several documentaries for radio and her Classical Commonwealth was nominated for the Prix Europa.

Errollyn received her honorary doctorate at the Royal Conservatoire of Scotland’s summer graduation in Glasgow where more than 300 students graduated across the disciplines of music, drama, dance, production, film and education. Honorary doctorates were also presented to actors and RCS graduates Sam Heughan and Ncuti Gatwa.

Commenting on her honorary doctorate, Errollyn Wallen CBE said: “It is with great pride and happiness that I accept this honorary doctorate in such esteemed company. What’s so special to me is that I am sharing one of the biggest days in students’ lives.”

Addressing graduating students, Errollyn continued: “I want to say a huge congratulations on your achievements in what can’t always have been an easy time, given what the world has been going through. What I do know about RCS – and I am so fortunate to be a Visiting Professor of Composition here – is that RCS loves you and will remain your bedrock throughout your life.

“The life of an artist, in whatever sphere you specialise in is not a straightforward path. I am here to tell you that the road is indeed long and winding but that everything you have endured recently has added immeasurably to the tool kit you will need to survive.

“I hope there will always be a voice in your head which says, ‘follow your own path’. Please promise me you will be brave and walk into the unknown with courage and joy. The world is all yours when you can meet it with humility and wonder.” 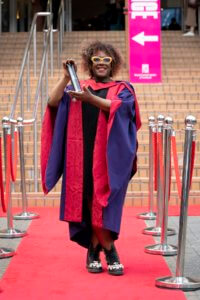 Professor Jeffrey Sharkey, Principal of the Royal Conservatoire of Scotland, said: “Errollyn Wallen is one of the most inspirational and influential figures in music today – a dynamic, creative force with a genre-spanning and illustrious career.

“As an educator, she shares her passion and insight with the next generation so generously and it’s an honour to have Errollyn as our Visiting Professor of Composition.”

Errollyn, who lives and works from a Scottish lighthouse, composed for the opening ceremony of the Paralympic Games 2012, for the Queen’s Golden and Diamond Jubilees, and wrote a specially commissioned song for the climate change conference, COP 26, as well as a re-imagining of Jerusalem for BBC’s Last Night of the Proms 2020.

In January, BBC Radio 3 featured Errollyn’s music across the first week of 2022 for its flagship programme, Composer of the Week and she has made several radio documentaries including Classical Commonwealth, nominated for the Prix Europa, which explored the impact of colonialism on music in the Commonwealth.

Errollyn founded her own group, Ensemble X whose motto is ‘we don’t break down barriers in music…we don’t see any’.

Errollyn Wallen collaborated with artist Sonia Boyce on her installation, Feeling Her Way, for the British Pavilion at this year’s Venice Biennale which won the Golden Lion prize for Best National Participation.

Her critically acclaimed opera, Dido’s Ghost, premiered at the Barbican, London, in June 2021 and will receive its US premiere in 2023 in San Francisco by co-commissioners Philharmonia Baroque Orchestra and Chorale.

The April premiere and tour of her latest opera (for Graeae Theatre Company), The Paradis Files, coincided with the premiere of Quamino’s Map, for Chicago Opera Theater.

Errollyn’s albums have even travelled 7.84 million kilometres in space, completing 186 orbits around the Earth on NASA’s STS115 mission. She was awarded an MBE in 2007 in the Queen’s Birthday Honours and a CBE in 2020 in the New Year Honours, for services to music.