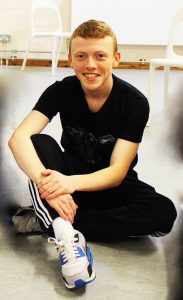 ”˜I find that coming here has made me a lot more focused on what I want to do. I’ve got a clear mind now, I know what to do and I know when. I’ve set myself a time I want to do it by, and I feel like the RCS has helped me a lot with that.’

Mark is a 17 year-old Film student from Carntyne in Glasgow, and is aiming for a place on the BA Digital Film and Television degree course at the RCS in 2017. He has two years of Transitions experience since he started in 2014, and is going to stay for another year before applying for undergraduate study.

Mark found out about Transitions at a careers day at his school where the Royal Conservatoire of Scotland had a stall to raise awareness of the funded tuition available to young people. He had been attending a drama class once a week and had acting experience, but he knew about people from his school who were unsuccessful in application to the Conservatoire and thought it was out of his reach. He was also unaware that he could study Screen until he heard about Transitions and how it can prepare you for degree courses in film-making.

Mark has had a healthy obsession with film from a young age; he would stay in and watch movies instead of going out to play football with his friends. He noticed that the way he obsessed about film was different to the way his friends appreciated them. He would write down his thoughts on a movie after watching it and explain how he would make it different and better. This evolved into him motivating himself to write his own scripts. The scripts he wrote before were short and he had no idea of how to progress with them, but he knew this was something he wanted to do.

”˜I knew I wanted to be involved in movies but I just didn’t know even how to turn a camera on really.’

After applying for Transitions, Mark met Andy Dougan, a film tutor at the RCS. Mark relished the opportunity to be critical about film and to write scripts, but he was worried about his lack of camera and real screen experience. On Transitions, Mark progressed quickly because he had access to cameras and equipment for the first time. He has now been able to use the equipment in the RCS to practice his craft and importantly to make his audition film for the degree application.

Mark has learned about the varying career options available to him through film.The skills he is learning on Transitions have increased the amount of jobs he is able to do on a film.

”˜I knew I wanted to be a scriptwriter, but this has given me a lot more options about what I’d want to do.’

As well as signposting options and giving Mark opportunities to try different roles in a film crew, he has also realised what personal characteristics are necessary and desirable for practising professionals.

”˜I feel a lot more confident since I came here and not just with cameras and stuff, just anything to do with film. I feel like I’m a lot more confident in school because they prepare you a lot for stuff at Transitions. The teachers make you more determined and professional in class when you’re working on stuff, and I feel like I act like that all the time now. Since I had joined Transitions I’ve felt like it’s prepared me a lot more for university and college. If I hadn’t come here I don’t think I’d have been anywhere close to being ready to apply at all.’