Transitions student Abbie joined us last year after a successful application and interview. During that time she has shown great courage and determination, building her confidence and skills through numerous learning experiences, as well as a HND at City of Glasgow college. We’re proud to have her as our Student of the month for October and asked her some questions about her journey so far…

The best thing about Transitions is”¦? Getting to take part in amazing opportunities and courses that otherwise I wouldn’t have been able to, for example Bridge Week. Also meeting new people and making friends!

The best thing about Filmmaking is”¦? Coming up with an idea for a film, either on your own or in a group, and being able to work collaboratively to make that idea come to life and able to watch on a screen

What have you been learning about recently? I have been learning more about scriptwriting. What the do’s and don’ts are, how to write based on genre, character development, etc. 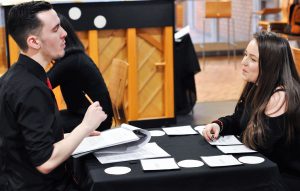 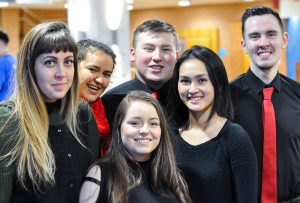 Greatest achievement so far? My greatest achievement is probably just how much my confidence in myself and in my art form has increased since joining Transitions. Through taking part in courses and activities/events, like summer schools, bridge week, assistant teaching 12-17s filmmaking classes on Saturdays with Duncan Sanders, my confidence has just shot up. Meeting new people and doing what you love the most, learning new things, has been incredible for me.

In 10 years time I will hopefully be”¦? Happily working in the industry making films and travelling world. I would love to inspire people to be themselves and do what they love.

My role model is”¦? Sophia Bush. I love that she uses her platform and fame in a positive way to influence and educate people on what is currently going in the world and how we can help to make a positive impact.

If I had to eat only one thing for the rest of my life I would eat”¦? Mac ’n’ Cheese

If you could be an animal”¦? I’d probably be a giraffe so I could see everything from a completely different point of view

”¦book? ‘Note To Self’ by Connor Franta

”¦film or TV programme? My favourite TV show is ‘Chicago Fire’ and my favourite film is ‘Boyhood’.

What advice would you give to someone thinking about a career in Filmmaking? To get involved in as many things relating to film as you can. Be passionate about it and know that you love it because filmmaking can be very demanding and hard work with long hours but as long as you love what you do, none of that will matter as you will be having fun. Go into the industry open and ready to be given feedback and criticism that will help you develop your skills and be open to new ideas someone may give you. Learn about the different roles on a crew and be open to trying them. Overall, just stay positive, get involved and have fun!