A musical theatre student at the Royal Conservatoire of Scotland has penned a new song about his passion for performing and how it feels to be part of the performing arts industry through a global pandemic.

What If I Told You was written by second-year student Harry Gascoigne in response to the challenges facing the theatre sector. It expresses the frustration of a ‘lost’ year of opportunities and the emotion of seeing dreams being put on hold before professional lives have even begun. There’s a note of hope too, conveying the dedication of young artists for whom the performing arts are a fundamental part of who they are.

Together with his year group on the BA Musical Theatre degree at Scotland’s national conservatoire, Harry recorded the song and accompanying video that’s shared for the first time today.

What if I told you,

That you couldn’t do what you wanted after years of waiting?

After years of training.

And what if I told you,

That you couldn’t be who you wanted after years of dreaming?

’Cause that’s how it’s seeming.

But not just for us, for you, arts need to survive.

So, where’s the compromise?

Because art is a fundamental part of our lives,

And the arts will survive and will continue to thrive. 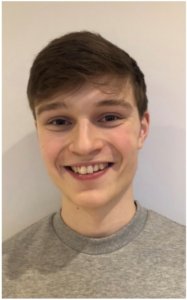 Harry said: “I wrote What If I Told You about the crisis in the performing arts industry when it felt that there was no support from the UK government or reopening dates in sight. Now, it feels like there’s light at the end of the tunnel. As the artists of the future, we stand together as we move into a new era of theatre.”

After writing What If I Told You on his piano at home, Harry shared the track with Emily Reutlinger, Head of the three-year BA Musical Theatre degree programme at RCS.

“Emily said it would be great to get the rest of the year group involved to record the song,” said Harry. “Everyone was up for it so I worked with my classmate Molly Stirrat, to pull it together.”

Emily Reutlinger, Head of BA Musical Theatre at the Royal Conservatoire of Scotland, said: “Harry has written a beautiful and meaningful song that captures the emotion of the last year for performing artists, who had to watch from the wings as theatres fell dark, with so much uncertainty surrounding their futures.

“What If I Told You is a rallying cry to the industry, a reminder that the arts will survive to see us through the darkest of times, and that these vibrant young artists are still here, still creating and producing work, and are ready to make their mark on the world.”

The second-year Musical Theatre cohort rehearsed and recorded What If I Told You under strict Covid guidelines at RCS: “There was a great atmosphere in the rehearsal room and it was such a special experience to come together,” said Harry, a songwriter and composer who also plays the saxophone, flute and guitar.

“Lots of students played instruments on the track. That’s one of the unique things about the Musical Theatre programme at RCS, that actor-musician element.”

Harry’s classmate, Molly Stirrat (below), who arranged and edited the music, said: “I’ve always been interested in composing and producing music. Harry and I wanted to incorporate as many people as we could so I decided to write parts for other students and their instruments. It was nice to see what first started as a basic backing track of drums, bass and keys become something more with the involvement of our amazing classmates who play instruments including viola, violin, cello, flute, sax, guitar, trumpet and banjo. 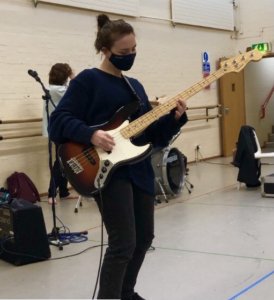 “It was a very enjoyable, new learning experience. From the first draft to the final production, a lot of hard work from both myself, Harry and all the other fantastic artists went into this and we’re very excited to share it with everyone.”

What If I Told You encapsulates the ethos of the Royal Conservatoire of Scotland’s #WeAreStillHere scholarship campaign that aims to ensure the next generation of artists can follow their dreams at one of the world’s top three destinations to study the performing arts (QS World University Rankings 2021).

The campaign is backed by Hollywood and West End actor James McAvoy – a BA Acting graduate – who narrates a short film that captures the creativity, resilience and dedication of students, staff and alumni throughout the pandemic. It voices an urgent call to support their future and that of the arts through scholarship.