Two reasons to celebrate for RCS graduates Jonathan O’Neill and Isaac Savage …  they’re in the running for a top entrepreneurial award and have also been named RCS Bruce Millar Fellows with £10,000 funding 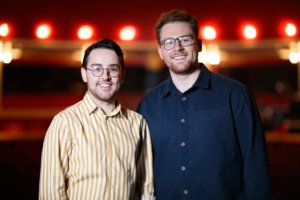 Isaac and Jonathan in the New Athenaeum Theatre at RCS

It was a ray of light during the dark days of lockdown. A conversation between two friends sparked a new business that, in just over a year, is capturing the imaginations of children across the UK and has earned them a spot in the finals of a top entrepreneurial award.

The dynamic partnership between Jonathan O’Neill and Isaac Savage, graduates of the BA Musical Theatre programme, has seen their company Make Your Own Musicals recognised in Converge 2021, Scotland’s largest entrepreneurial development programme for the university sector.

They have also just been announced as the recipients of the RCS Bruce Millar Graduate Fellowship 2021/22 for their O’Neill and Savage musical theatre writing collaboration, which will support them as they develop a pioneering new project – a  genderless musical that will champion stories and characters from the LGBTQI+ community.

It has been quite the year for the friends who graduated in July 2020 and who certainly haven’t let a global pandemic quash their creative spirit and career aspirations. To reach the Converge final – which takes place this Thursday – and to be named Bruce Millar Fellows within the space of a few weeks feels ‘amazing’.

“We’re so honoured to be recipients of the Bruce Millar Fellowship. It gives us the opportunity to create work and collaborate on something that wouldn’t be possible without such support. It feels like we’re starting to get a foot in the industry which is really exciting.”

The Bruce Millar Fellowship is open to new graduates of the RCS School of Drama, Dance, Production and Film (DDPF) with an award of £10,000 for a project, performance, phase of research and development or to launch a creative company.

Jonathan and Isaac, who were selected by an external panel after a competitive application process and live pitch, will use their funding for a year of research and development towards their new musical, which has a working title of Letting Go.

“It’s inspired by loss over the course of the pandemic with a message of resilience, love and hope,” explains Jonathan.

“We’re excited about the genderless writing format that can be applied in other writers’ works, resulting in many more portrayals of diverse relationships on stage and more opportunities for performers of all genders, especially those that identify as trans, non-binary or gender non-conforming.”

Jonathan and Isaac will draft the book and score and then hold a two-week workshop bringing together actors and other creatives to develop the work further, produce song demos and video footage. They hope to use this material to share with producers and venues with the long-term goal of sharing their new work at the 2023 Edinburgh Festival Fringe.

“The musical will allow actors across the gender spectrum to be represented on stage and will be cast on voice type,” says Isaac. “As far as we know, it would be the first time it has been attempted in a musical which is very exciting and terrifying!

“The Bruce Millar Graduate Fellowship is really special and will help us develop as artists. We’ve had so much support from RCS and the Research and Knowledge Exchange, which has been lovely and has given us such a boost, especially in such a weird time.”

With the Converge final looming – they’re in the Creative Challenge category – and with a first prize of £20,000 in equity-free cash and £20,700 of in-kind business support (and a runner’s up pot of £10k and £9,420 of in-kind support) – winning would allow Jonathan and Isaac to further develop Make Your Own Musicals.

With co-founder Adam Lenson, a London-based director and producer, the trio creates children’s activity packs to help them write, rehearse and perform their own original mini-musicals at home and in the classroom.

It includes packs like Hero Academy – A Super Musical and Bad Taste – A Baking Musical where children and young people are sent everything from scene-writing and songwriting prompts to original backing tracks, sound effects, lyrics and print-out tickets.

Following the same process Jonathan and Isaac use for writing musicals, the packs are structured to take young performers through every element and musical experience isn’t essential either, the packs are accessible to all.

Now, the plan is to introduce a subscription box, as Jonathan explains: “It will be immersive and tactile and will encapsulate the whole theatre experience where children and young people can not only be performers and writers but set and costume designers, directors and producers.

“Each box will have a different theme and will turn into a mini theatre with props, costumes and backdrops, along with things like programmes and recipes where they can make their own interval snacks. We’ve made a prototype, which is really exciting. Hopefully, if we win Converge, we can take it to the next level.”

Isaac adds: “We have such a love for what we do and we believe kids should have those opportunities too. We thought it would be great to develop the digital packs into something physical so we’ve designed this really cool-looking box that turns into a mini model of a theatre with props and costume elements, all these little things to make it more than solely a writing experience and performance.

“The three of us would all stage shows for our parents when we were young – I put on a one-man Les Mis when I was eight that went on for about two hours, I had very patient parents! There’s so much fun and creativity involved as well as the confidence, communication and teamwork skills that music, drama and production bring.”

There’s still plenty more to come from this powerhouse partnership. One of their songs will be performed in Aria Entertainment’s The Chamber Music Sessions concert at the Garrick Theatre in London’s West End on October 4, which showcases the best new writing talent for UK chamber musicals.

Jonathan and Isaac were commissioned by Minster Performing Arts to write a show for the school and Belongings will be unveiled soon and Isaac will make his professional stage debut in Dundee Rep’s A Christmas Carol this November and will also be part of the creative team as musical director.

Other recent projects include The Great Elf Escape: LIVE at Ayr’s Gaiety Theatre where they worked with Fearless Players, founded by fellow RCS musical theatre alumni. Last year, two of their songs, Bottle It and Home were shortlisted for the Stiles & Drewe Best New Song competition and were performed by West End stars in an online concert.

Jonathan and Isaac were also part of a recent RCS Creative Conversation for alumni alongside award-winning musical theatre graduates Noisemaker – Claire McKenzie and Scott Gilmour – where they discussed everything from how they got their start in the industry to how they’ve created innovative new business strategies since lockdown.

So what does the future hold? “We’d love to continue doing what we’re doing now, a mix of writing, performing and developing Make Your Own Musicals,” says Jonathan. “There’s a real ethos of adaptability at RCS which taught us that you don’t have to shoehorn yourself into just one role.”

Find out more about Jonathan and Isaac