It was a night to celebrate the brightest musical talent on the traditional music scene. Last night, as part of Celtic Connections, six of the nation’s most exciting young artists – five from the Royal Conservatoire of Scotland – performed blistering sets in front of a live Glasgow audience.

Presented by Joy Dunlop and Bruce McGregor, the event was broadcast live on BBC Radio Scotland and BBC ALBA in front of a socially distant audience.

The title was bestowed upon Borders fiddler Eryn Rae who impressed judges and wowed the crowd with a ‘breathtaking’ performance. 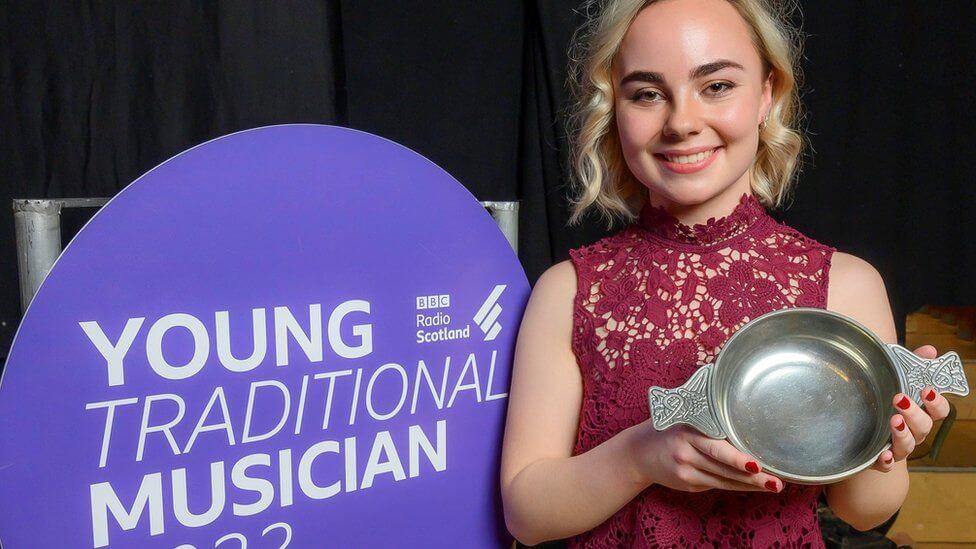 Speaking after her win, Eryn said: “This has been such a special evening. To be back in City Halls performing alongside the other finalists was just so moving and uplifting. After what has been a tough two years for the performing arts industry, events like tonight are just a massive boost which signal a hope for better things to come.

“I am thrilled to have won alongside such amazing performers and look forward to what comes next as I know this title has been a springboard for many previous winners, I hope to follow in their footsteps.”

Eryn, who is in her final year on the traditional music programme at RCS, started learning the fiddle at the age of seven under the tuition of renowned Shetland fiddler, Catriona Macdonald.

She wins a recording session with BBC Scotland and she will perform at the Scots Trad Music Awards and be given a one-year membership to the Musicians Union.

Eryn was presented with the award by BBC Scotland commissioning editor Gareth Hydes, who said: “Eryn’s performance was breathtaking, an absolute celebration of the rich and vibrant traditional music scene we’re so lucky to enjoy in Scotland.

“I want to join all the other judges in congratulating her, and hope that we can once again fully embrace our nation’s fantastic live traditional music scene as we start to emerge from what has been a tough couple of years.”

RCS offers the UK’s only Bachelor of Music (Honours) degree dedicated to traditional and folk music. The curriculum recognises that the innovative nature of Scottish traditional music today must be embraced and that for traditional music to flourish from one generation to another, the creative development of the individual must go hand-in-hand with an understanding of its roots. It’s interwoven with a solid basis in contemporary and eclectic performance practice.

Professor Joshua Dickson, Head of Traditional Music at the Royal Conservatoire of Scotland, said: “We are incredibly proud of Eryn, who has emerged in recent years as a truly exciting young talent in Scottish traditional music. From Borders beginnings, she’s already made a name for herself on the thriving Glasgow scene and we can’t wait to what’s next in store.

“But if ever there was a case of ‘first among equals’, all of the finalists this year are hugely creative and inspiring musicians who contribute so much to Scottish music today. The Royal Conservatoire is very proud of them and wishes them all success!”

Since 2001, when the final was first staged at Celtic Connections, the BBC Radio Scotland Young Traditional Musician, promoted by Hands Up for Trad, has been a prestigious career launchpad for winners and runners-up alike.

RCS students and graduates have featured prominently in the competition over the years and recent winners include fiddle player Benedict Morris in 2019 and singer Hannah Rarity in 2018.

Visit Hands Up for Trad for Q&As with the six finalists.

Find out more about studying on the four-year Bachelor of Music Traditional Music degree at RCS.