The Royal Conservatoire of Scotland (RCS) is ranked one of the world’s top five destinations to study the performing arts, in prestigious global rankings published today (Wednesday 6 April).

Scotland’s national conservatoire – which celebrates its 175th anniversary this year – is ranked number five for performing arts in the QS World University Rankings by Subject 2022.

It’s the sixth time since the ranking was established in 2016 that the Royal Conservatoire of Scotland (RCS) has been rated in this prestigious global top ten.

QS Quacquarelli Symonds – the international higher education think-tank – provides independent comparative analysis on the performance of 15,200 individual university programmes taken by students at 1543 universities in 88 locations across the world, across 51 academic disciplines. They are part of the annual QS World University Rankings portfolio, which was consulted over 147 million times in 2021 on TopUniversities.com.

Established in 1847 and based in Glasgow, the Royal Conservatoire of Scotland is one of the world’s most multi-disciplinary performing arts, research and learning environments spanning classical and traditional music, drama, dance, production, film and education.

Studying at RCS is to be immersed in a creative and collaborative arts community with students from more than 60 countries and active partnerships with all of Scotland’s national arts companies.

RCS is a centre of performance, with purpose-built venues and a learning environment which encourages students to create new work, collaborate with peers across disciplines and develop ideas across a range of platforms, both physical and virtual, focused on equipping the next generation of artists and creative producers to use their art to make an impact in the world.

Professor Jeffrey Sharkey, Principal of the Royal Conservatoire of Scotland, said: “We know the convening power of the arts, their ability to share our stories and comment on the best and worst of the human condition. We’ve campaigned continuously to keep our arts alive throughout the pandemic for our conservatoire and for the whole of our nation.

“This recognition is a wonderful testament to the resilience, perseverance, and creative expression of our students, staff and wider community of supporters and I thank them all for their amazing efforts.”

Nick Kuenssberg OBE, Chair of the Royal Conservatoire of Scotland, said: “Congratulations to the entire Conservatoire community for this wonderful accolade. Scotland’s national conservatoire has delivered excellence in teaching for over 175 years and this latest recognition reinforces its reputation as a global leader in performing arts education and research.

“Despite the pandemic, yet again the Conservatoire has been able to maintain its value set and continues to develop its pedagogy and unique combination of disciplines at the highest level.”

To commemorate its 175th anniversary year, RCS has published a book with Luath that turns the spotlight on the fascinating history of a world-renowned performing arts school and a jewel in Scotland’s cultural crown.

Royal Conservatoire of Scotland: Raising the Curtain showcases 175 years of magic and memories with intimate insights from more than 20 famous alumni and former staff, and stunning images that include never-before-seen photographs and archival material.

Royal Conservatoire of Scotland: Raising the Curtain is available in paperback (£20), hardback (£40) or a special limited-edition copy (£175) from the RCS shop. Proceeds from books bought through the shop will support the student experience. 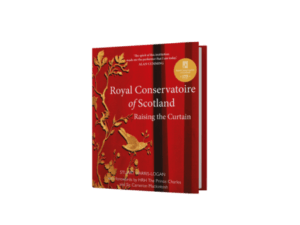 Find out more about studying at the Royal Conservatoire of Scotland