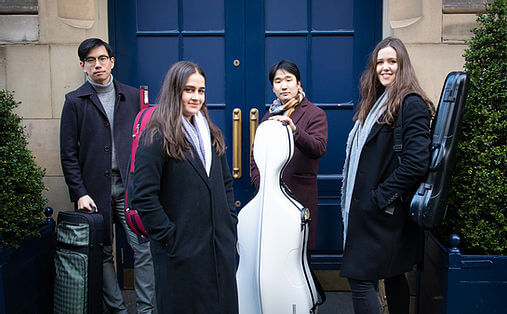 The competition features the best of the best from conservatoires and colleges across the UK.

Quartets performed Beethoven’s Quartet in A major, Op. 18, No. 5. String quartets alternate annually with piano trios to compete in the competition.

Dr Gordon Munro, Director of Music at the Royal Conservatoire of Scotland, said: “Huge congratulations to the Resol String Quartet for winning first prize and the coveted audience prize, voted for by the public, at this year’s CAVATINA Intercollegiate Chamber Music Competition.

“This competition attracts the finest chamber musicians from music schools all over the UK so to take home not one but two awards is a tremendous achievement and testament to the outstanding musicianship of Maria, Annabel, Raphael and Futo. This is the first time RCS has won the competition in its current form and we are all thrilled for Resol and so very proud of them.”

Professor David Watkin, Head of Strings at the Royal Conservatoire of Scotland, said “We are so proud of this group! They bring together such a diverse range of approaches and find a really convincing synthesis of ideas and musical inspiration through sheer hard work and dedication. They have had input from a great team of coaches – to whom a big thank you – but ultimately they have made this piece their own.”

Resol String Quartet was formed at RCS in 2018 through a shared love of chamber music and a vision to make classical music-making more inclusive.

Richard Bratby, CAVATINA adjudicator, said: “After an unprecedented fourteen months, in which ensemble music-making has at times been almost impossible, it was inspiring – as well as hugely enjoyable – to hear so many outstanding young quartets playing with such consistent artistry, insight, and commitment.

“We couldn’t have hoped for a better demonstration of the intelligence and stylistic diversity of the emerging generation of chamber musicians.”

The CAVATINA recognition adds to a string of recent accolades for the Resol Quartet. Last year, as well as opening the RCS Rosin Chamber Festival, alongside the world-renowned Brodsky String Quartet, the quartet won First Prize in the RCS Mabel Glover String Quartet Competition, were awarded the Mary D Adams prize for chamber music and placed in the Governors’ Chamber Music Competition. 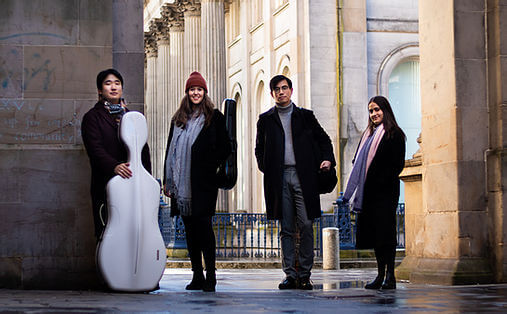 The quartet made the decision to continue to rehearse together during the Covid-19 pandemic, even when members were in different parts of the world, coming together online for artistic discussions and rehearsals. When eventually reunited, the ensemble hosted four online performances with repertoire from Boccherini, to Shostakovich and Jessie Montgomery.

The ensemble was invited to perform for the Brunton Chamber Music Recital Series in August with an immediate re-invitation for August this year. Plans include a concert tour in Sussex in September, with music by Brighton-born composer Frank Bridge, amongst others.

The tour will also include masterclasses in local schools, such as Brighton College, where the quartet will be working with the students, inspiring them with their love of chamber music.