A Royal Conservatoire of Scotland student described as one of the nation’s ‘most exciting young musicians’* has taken home the top prize in a prestigious annual music competition.

Ryan is the first accordionist to reach the Gold Medal final since 1997 and only the second to win in the competition’s 69-year history. Founded in 1910, the Royal Over-Seas League is a non-profit private members’ club dedicated to championing international friendship and which helps artists and musicians across the Commonwealth connect, collaborate and create. 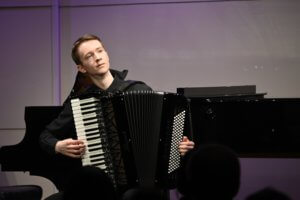 Ryan competed against cellist Matthias Balzat, soprano Milly Forrest and flautist Marie Sato in an event at Over-Seas House in London which showcased the talents of the brightest emerging artists from across the Commonwealth and beyond.

Ryan said: “I’m delighted to have been awarded the Gold Medal at the Royal Overseas League Annual Music Competition and would like to thank all who have supported me in preparation, especially my teacher Djordje Gajic.

“The team at ROSL Arts do outstanding work in providing opportunities and guidance for musicians and artists so having their support at this stage is invaluable. I am greatly looking forward to our future projects together.”

Ryan’s teacher is the internationally acclaimed accordionist Djordje Gajic, who is a lecturer in the RCS Keyboard department.

Djordje said: “A gold medal at the ROSL final is a tremendous success. Ryan’s performance was characterised by passion, brilliance, and a supreme intelligence, captivating all present in the hall.

“Ryan continues to be an excellent ambassador for our instrument and leads a group of extremely talented Scottish-based classical accordionists toward a very bright future. I could not be prouder.”

Watch Djordje Gajic in the RCS Learn from the Best series

For nearly 70 years, the ROSL Annual Music Competition has helped launch the careers of young musicians from all over the UK and beyond, offering awards totalling £80,000 and expert mentoring and support.

Geoff Parkin, ROSL Artistic Director, said: “Out of an evening of exceptional music making from all the performers, Ryan connected with audience and jury alike with his innate ability to communicate through his accordion. His sound world, phrasing and musicality mark him out as a very special musician and we look forward to supporting his future career.”

Ryan began playing accordion at the age of eleven and was self-taught until he started learning with Djordje Gajic at fourteen. He has performed solo concerts at the Berlin Philharmonie, Jesus-Christus-Kirche Dahlem, University of Glasgow, Perth Concert Hall, Edinburgh Festival and Edinbach Festival. 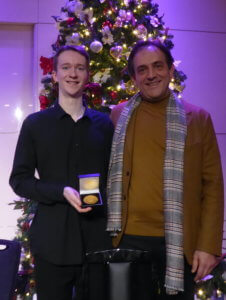 Ryan with his teacher and duo partner Djordje Gajic

His experience as a concerto soloist includes performing Václav Trojan’s Fairytales concerto at the Queen’s Hall, St Mary’s Cathedral, and the Royal Conservatoire of Scotland. This year, he recorded Bach’s fourth keyboard concerto with the Berliner Symphoniker as part of the Piazzolla centenary celebrations and he looks forward to performing as a soloist with the National Youth Orchestra of Scotland in June 2022.

As an avid chamber musician, Ryan has been invited to play with Red Note Ensemble, Hebrides Ensemble, and the Maxwell Quartet. He has also performed at private events for Sir Jackie Stewart and Dame Kiri Te Kanawa.

This year, Ryan formed an accordion duo with Djordje Gajic and forthcoming concerts include a performance at the Royal Conservatoire of Scotland on December 3 and Milngavie Music Club on December 10.