The power of music, combined with new dramatic footage from NASA and National Geographic, will bring the impact of climate change over the last 20 years on planet earth to the forefront for a powerful live and cinematic event at Glasgow Royal Concert Hall during COP26.

Supported by Bloomberg Philanthropies and delivered in partnership with Global Climate Uprising Festival, Vital Signs of the Planet, on Tuesday 2 November, brings together a 100-strong symphony orchestra of young musicians from the Royal Conservatoire of Scotland and its Junior Conservatoire with internationally recognised conductor Emil de Cou and singer-songwriter Natasha Bedingfield to create a 90-minute live spectacular blend of sound and cinematic visuals. 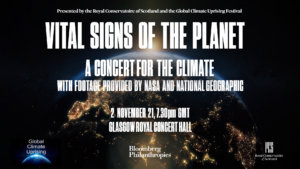 This is a special moment for global youth and the arts to speak for the planet in Glasgow at this vital time for the world. Against a backdrop of volcanoes fuming, hurricanes flooding and wildfires sweeping across the landscape, young musicians and leaders, champions of the environmental movement, will tell their stories of climate change in a concert designed to inspire and motivate audiences in Glasgow and internationally.

Highlights will include footage of climate change from NASA and National Geographic, messages from the International Space Station and the Earthshot Prize, and appearances by young environmental partners from the most impacted areas of the world.

Building on Bloomberg’s commitment to broaden access to the arts and support climate activism among youth communities, students from Glaswegian schools will be able to access the concert for free. Tickets are £10 (£2.60 concessions) and are on sale now on the Glasgow Royal Concert Hall website.

The Global Climate Uprising Festival is an international collaboration of environmental organisations, educational and cultural institutions, artists and activists, who will present their work in climate change research, advocacy and new solutions through media, art, and technology at COP26.

They will perform under the baton of celebrated American conductor Emil de Cou, former conductor of America’s National Symphony Orchestra. Mr de Cou has worked with NASA for more than 10 years, most recently for the celebration of the 50th anniversary of the moon landing.

Professor Jeffrey Sharkey, Principal of the Royal Conservatoire of Scotland, said: “Art speaks a universal language. It unites us, it moves and inspires us, and it is a powerful vehicle for change.

“We’re intensely proud to have our young artists of Scotland come together with young leaders from across the planet and powerful advocates for climate action as the world’s attention is focused on our city and our nation. These young artists and activists are the future, our planet’s future, and their message must be heard.”

Jemma Read, Global Head of Corporate Philanthropy at Bloomberg L.P, said: “Young people are uniquely impacted by the adverse effects of climate change. At Bloomberg, we recognise the important role that art and creativity plays in bringing communities together and inspiring local action.

“This ambitious platform will enable a diverse collection of young voices to showcase their creativity and demand urgent action to protect our planet. We are delighted to add our support to such a vital and inspiring project.”

Jayni Chase, Chairperson, Friends of the Earth U.S., said: “Addressing the climate crisis requires moving our hearts, minds and souls into action. By combining live and cinematic images with the power of music and the voices of today’s young leaders and visionaries, Vital Signs of the Planet brings home the urgency for immediate meaningful climate action. We need the negotiators, activists and business leaders participating in the COP26 climate talks to act decisively, now.”