My name is Sanjay Lago and I am an actor and theatre-maker. I graduated with a BA Hons in Contemporary Performance Practice degree from the Royal Conservatoire of Scotland in 2019.

I trained as an actor previous to this at college, but the undergraduate programme not only taught me skills in performing but also directing, producing and writing. I graduated a more well-rounded artist and started creating my own work too. I also got the chance to work with companies across the UK and here at home.

Even though I auditioned to get into drama school like everyone else, I didn’t just apply straight up. I came to the drama school through doing two years of short courses with the Drama at 60 Scholarship which supports artists that wouldn’t usually be able to afford to get in. I was lucky to have met amazing staff and on April Fools’ Day 2015, I got my unconditional offer from the Royal Conservatoire. I didn’t believe it for a good few hours then a friend told me that no way one of the biggest drama schools in the UK would play such a prank on me!

I thought I would be anxious about what to do and if I chose the right path. It is an industry where you just never know what will happen or who you will meet or where you will go.

It wasn’t always easy but I made great friends with people across the conservatoire. During my studies, a lecturer helped me to find out that I am actually dyslexic; this was the first big life change I experienced at RCS.

Over time, I created my own shows looking at themes such as belonging, identity, masculinity and male suicide. Another life change was to be able to speak about such topics. The other big life change was I came out to my parents in my final year. I felt so supported during my time at RCS and the people around me that I came out to my parents the day before my 26th birthday which was also my degree show. It just showed to me the power of the arts, that I was able to feel comfortable and speak about myself in an autobiographical show and know that I was supported. 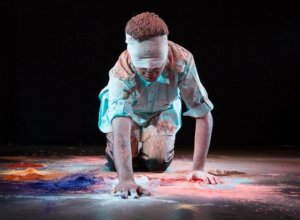 Sanjay during a performance in his first year

Whilst studying, I juggled four jobs. These were ushering in two theatres, ushering in RCS and doing admin in the Short Courses department. I was always known as someone who juggled a lot and I felt it was right to work as I wasn’t always 100% sure what life after graduating would be like, if I would get work creatively straight away or not.

In reality, I have taken on less ushering and have set days for my admin work, so I am able to earn money that way. I have returned to acting and been creating and acting in short films. I also acted as an elf during the Christmas period. I was lucky enough to get funding for a new work in progress and also to get funding to further develop my shows.

I have always been a believer that with this industry, the work won’t come to you, you have to go and get the work. You have to network and get your voice heard out there. I was lucky enough during my degree to make connections with people across the creative circles in Scotland.

Being of South Asian heritage, I was also brought on board to host a festival with other artists and to bring my love of art into the world of my culture.

I found myself doing jobs that were admin based, I was on committees talking about the arts and was also hosting charity concerts. I never expected to be doing this post-graduation, but it was a great change. As well as these jobs, I got time to write and read more, as well as teaching drama in schools.

The delightful results of doing what I love was taking on a degree course that grew my passion and opened other doors. It isn’t an easy industry and there is still lots to learn, e.g racial diversity and how to create more work for new artists.

I never thought I would be doing what I am today. Many years ago I was told that I would never get a degree, these words stayed with me and I worked hard to not let it get me down. So never give up your passions and dreams.

It’s a rollercoaster, but if you love the thrill and adventure, then step aboard. And know that you will always find people at RCS to support you! One thing I am thankful for is the friends I have made for life.

One thing I learnt at RCS is to never give up. If you don’t get in first time – don’t give up. Or you can look into other avenues to go into. I am so thankful to the Short Courses department and their tutors who were the people who inspired and supported me in my early days of Drama School. And to all the teachers in my life.

In summary from me: