This month’s archival object comes from the Conservatoire’s extensive musical instrument collection; a French horn dating from 1853 and designed and manufactured by Belgian inventor and musician Adolphe Sax.

Antoine-Joseph (Adolphe) Sax was born in Dinant in modern-day Belgium in 1814. His father, Charles-Joseph Sax, was a musical instrument maker specialising in wind and brass, although he also dabbled in some string instruments.

It was through his father’s work that young Adolphe was introduced to the art of musical instrument manufacture; a career which would ultimately memorialise the family name.

From a young age Adolphe Sax began experimenting with instrument design. Upon leaving the Royal Conservatoire of Brussels, Sax was already patenting an improvement to the bass clarinet, however it was his association with the composer Berlioz after Sax moved to Paris in the 1840s that was to really kick-start his innovations.

Berlioz was inspired by Sax’s work and composed pieces to be played exclusively on the new family of brasswinds he was creating; what would become known as saxhorns. Originally a development of a valved bugle, the saxhorn would eventually be manufactured in a number of different sizes up to and including bass saxhorns, and their invention was to pave the way for the modern flugelhorn and euphonium.

Sax also had some limited success with his invention of the saxtromba, an intermediate instrument which resembled a marriage between a trumpet and a French horn. The Sax name lives on with us in his most enduring creation, however: the saxophone (patented on 28 June 1846).

The RCS Archives & Collections hold a number of instruments made by Adolphe Sax. Here we have a very fine French horn, made during Sax’s time in Paris. 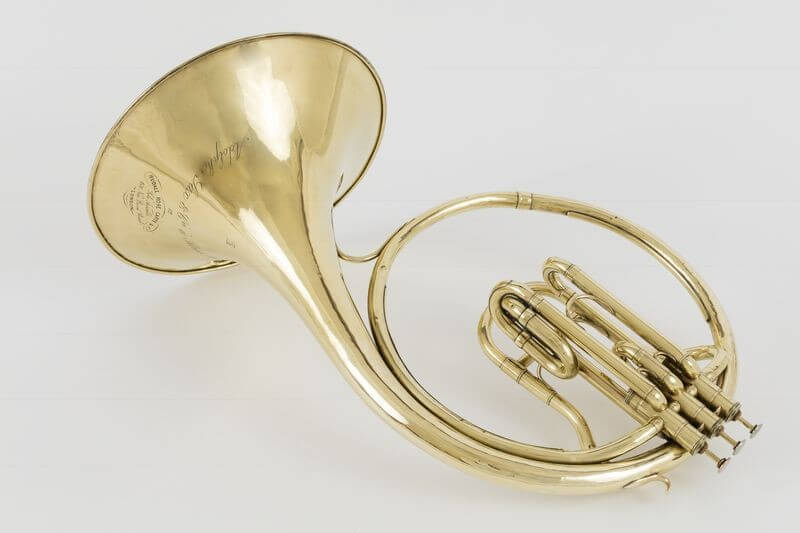 It was exhibited in Belgium’s Musical Instrument Museum as part of their Sax 200 anniversary exhibition and is one of the most valuable and rarest horns in the John Webb Collection of historic musical instruments. Full technical specifications are available here.

The Royal Conservatoire of Scotland’s historic musical instruments held by our Archives & Collections are a living museum collection, available for use by our students and staff.

A complete catalogue can be found on the Archives & Collections website and technical specifications and photographs of each instrument are included on the MINIM database, the largest online collection of historic musical instruments in the UK.