I’m at home in Bishopbriggs.

I’m definitely wearing trousers and I’m wearing a shirt today, which is slightly ironed. I haven’t ironed in weeks.

We’ve now come to the end of the term but we used Teams and Zoom and we kept our classes going online with tutorials and visiting speakers.

We normally have lots of visits to the Composition department from artists and artistic companies who are performing or working in Glasgow, like at BBC SSO’s Tectonics festival. A few people who were due to perform kept the dates and ”˜visited’ us online.

Our Visiting Professor of Composition (Dr Kate Moore), led talks about her music and gave tutorials to our students for a week. The department has also had a number of other speakers, including composers Naomi Pinnock (calling in from Yorkshire) and Liza Lim (speaking from Melbourne!); Darragh Morgan, an Irish violinist based in London, worked over Zoom with the students.

We’ve also been promoting our students’ online activity through things like Red Note Ensemble’s Digital Noisy Nights which offers musicians and composers the opportunity to engage in live performance, as well as our Facebook page.

We were all disappointed about the cancellation of PLUG but we will endeavour to reschedule and record works written for the festival in the future. 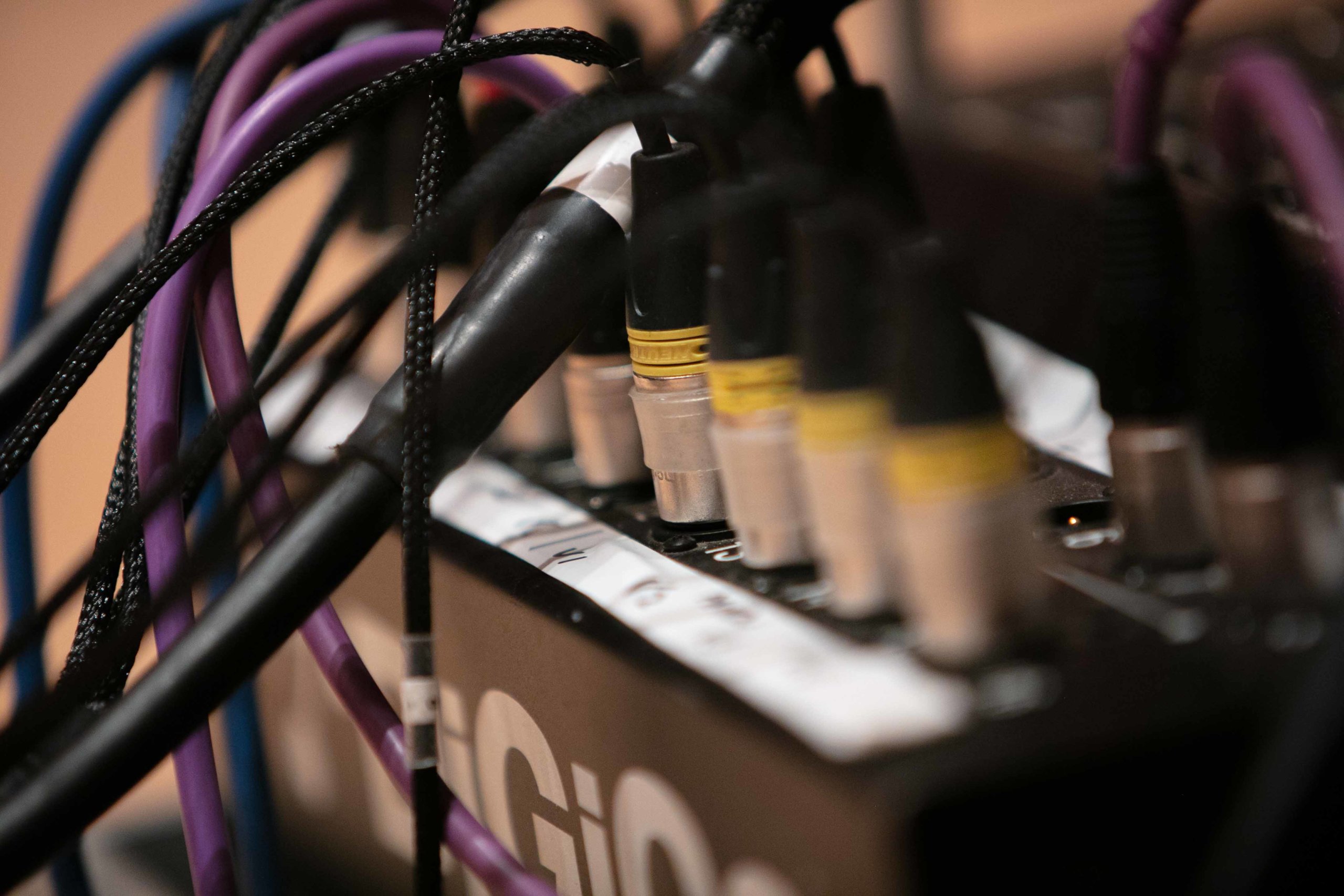 Some for fun, some for work. Portable Music and its Functions by Andrew Williams is probably the least exciting. I’ve been going through my bookcase and re-reading classics and keep returning to Stephen King.

It changes because we’ve been working with students to promote their work. I’ve been dipping in and out of various bits and pieces. I have a whole pile of CDs that I’m going through at the moment on the back of the Scottish Awards for New Music. My friend Richard Craig a virtuoso contemporary flautist was nominated in one of the categories so I’ve been listening to his album Vale.

I’ve been teaching here for ten to 12 years but many moons before that I completed a PhD here, and I’m also trained in classroom music teaching (from the University of Aberdeen). Before I started a job here (I was very part-time to begin with) I was teaching music and support for learning (working with asylum seekers) in Drumchapel High School and doing supply teaching in schools around Glasgow.

I was initially employed for my skills as a composer but even as a young composer, I always had an interested in education. I’ve always believed the old adage that great musicians don’t always make great teachers. Teaching is an art form; you need to work hard at it and it takes a while to get good at it. You can’t wing it. You need to be prepared and think about who you’re working with, treating it more as an arts practice rather than a job. RCS is an inspirational place with people who have made teaching their art practice, in addition to their performance and research practices.

It’s quite difficult to pin that down. At the moment, my role is about facilitating different events and activities for the students and that’s one of the things I enjoy a lot. I’m very proud of what they’ve achieved.

A large part of my job is finding opportunities for students as there are many organisations that want to work with our composers, which is great. I spend an awful lot of time meeting with people, having creative conversations and following things up. I find those conversations really interesting, as well as putting people together. In a way that’s what music is about bringing people together.

One of the organisations I’m involved with is New Music Scotland, which is a good example of collective responsibility for trying build a better culture and environment for new music to exist. That’s the goal; to make it better, to have more of it, to make sure more people appreciate it and to find a way to shout about all the good stuff we’re doing in Scotland.

One of the things I like is that every single day is totally different, which suits my personality. I love the variety.

Whatever ”˜normal’ is, I spend a certain amount of my day teaching composition, maybe liaising with staff and having conversations with individuals from external organisations about opportunities for the students.

I prep international artists for visiting talks and how they might interact with our students and sit in on class sessions, as well as our composition forum, where speakers talk to the composers about their work.

We had a series of talks from our fourth year composers recently and it was nice to be there, to provide a bit of feedback on their work and to find out where they are in life.

We’ve also spent time looking through portfolios for assessments which is always a joy it’s a wonderful opportunity to look at somebody’s work and have a conversation about it. It’s a really nice time of the year, and really feels like the culmination of something. It beats working for a living (if I had a motto!).

I started playing the piano because my sister did and I didn’t want her to be better than me! I started the trumpet at the same time too.

I was, and still am, a heavy metal fan and continue to go to gigs with Iron Maiden, Slayer and Faith No More. That sparked my musical interest in the raw energy of ”˜ugly’ music. I also played in terrible bands when I was younger.

I thought for a while that I had to be the standard classical musician throughout my studies; I had lessons from well-known composers Oliver Knussen and Julian Anderson and I realise now that I wouldn’t have had a conversation about metal bands with them!

Many of our staff and students come from all types of musical starting points and backgrounds, and I think that’s also reflected in the breadth of compositions created this year; there’s all sorts of collaborations and interesting ways to work.

I did my undergraduate at the University of Aberdeen and I hung around with lots of friends who were interested in metal. I was into a whole mixture of stuff. Aberdeen had a good world music department with steel bands, samba and gamelan and I learned a lot about jazz.

There was a requirement to attend a number of choirs and ensembles and I signed up to everything. Not because I was a good performer, but because I just loved it. I also used to play in soul bands if I hear Soulman or Mustang Sally again I’ll go crazy! I’d go to all sorts of gigs around the city, which was really useful, and a big part of my education.

I don’t know part of me always thinks I should have been more serious or more focused on one particularly thing ”¦ possibly. It’s difficult to say; maybe being a bit less scattergun in my approach to everything. But that has continued into adult life now, so I’m stuck with it!

I studied for a while with John Maxwell Geddes, who was a mentor and friend, and we used to go fly fishing together. He was somebody with a great deal of experience and had a range of high-level skills as a composer, musician and conductor, but was a very modest guy and didn’t really shout about it. He was from that old-school Glasgow music scene and was a very good teacher.

I’m interested in finding new environments and settings for music; I’ve worked a lot with Drake Music Scotland on inclusive music making, incorporating people who may not otherwise be included in music.

One of the projects we worked on together in 2017 with NYOS, was Microscopic Dances, a large-scale, inclusive work for digital orchestra. It won a British Composer Award in 2018, which felt like a real career highlight. That was a very rock and roll affair after a late night I had to run for an early-morning train from London to Glasgow to teach at RCS and left the award in the hotel room. Luckily, I was reunited with it thanks to one of the Drake Music Scotland staff who brought it back with them. 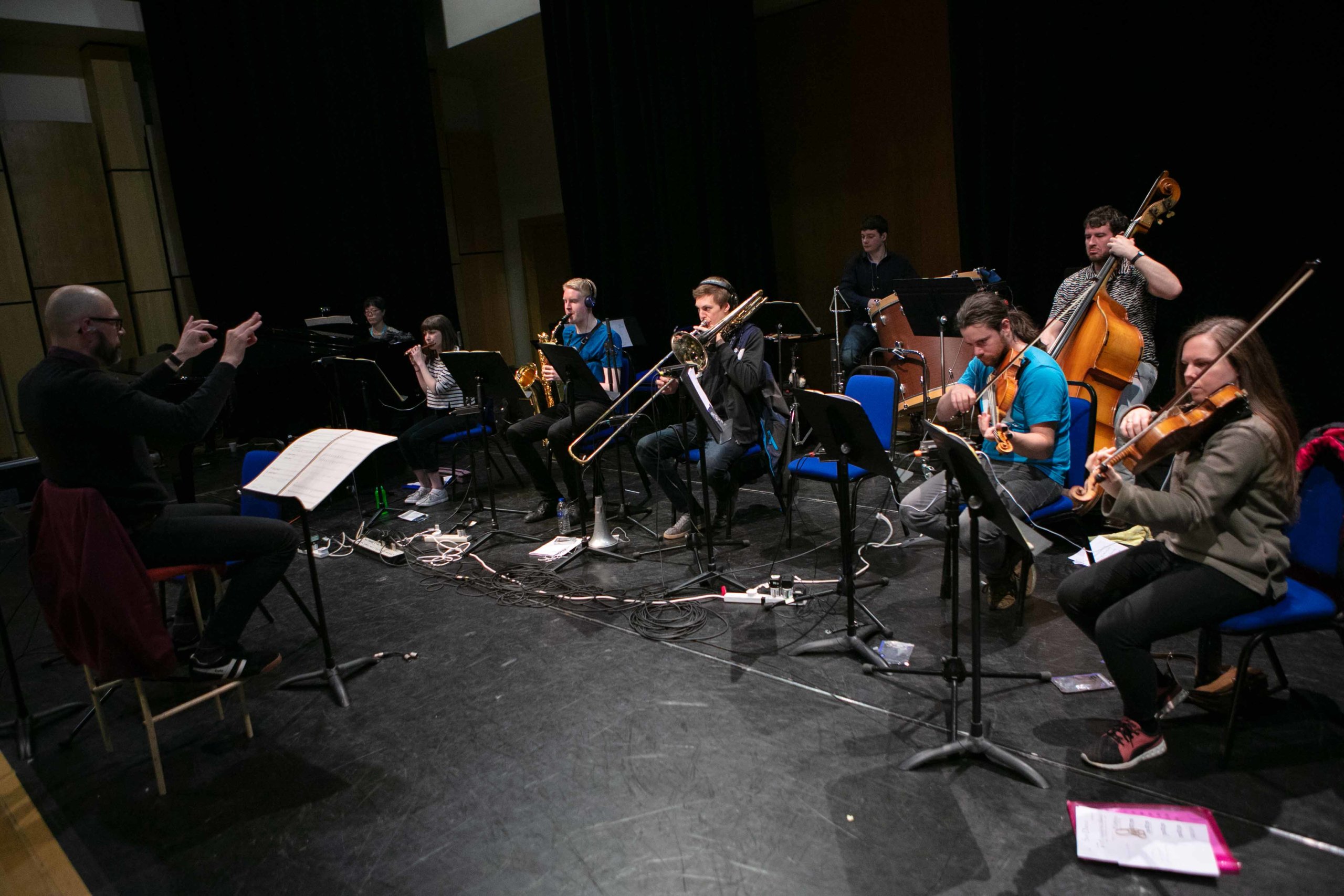 I’ve been in the role of organising PLUG for the last couple of years, which has been a trial by fire and an interesting experience. Seeing those big student compositions happen, in collaboration with actors, film or dancers, is definitely something special.

I’m not finding it the most creative time at the moment, I feel like there are a lot of distractions. For me, it’s trying to do what you can and think carefully about the expectations there are at this time.

We don’t have to know everything all at once. It’s important to try and keep doing what you’re able to do and keep that practice going to find things of interest. We’ll all be meeting again in person soon, where we can all talk about this time and find a way ahead for the future of the arts.

Find out more about studying Composition at the Royal Conservatoire of Scotland at undergraduate and postgraduate levels.