In my flat in the north of the city. I have some help from time to time from my apprentices, Noodles and Ronson (my eight-month-old kittens). Their organisational skills aren’t up to much yet, their attention spans are limited and they sleep on the job. However, both of them have made their debuts on Microsoft Teams Meetings and have agreed to receive payment at this time in Dreamies (other cat treats available). 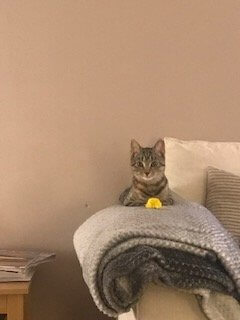 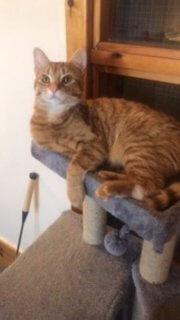 A hoody and some old gym leggings covered in paint. I’ve washed my hair though, and I even put mascara on today.

I’ve just finished The Family Upstairs by Lisa Jewell which I enjoyed. My next read is going to be My Life with Murderers by David Wilson, which is a true account by a criminologist. Then followed by Starman: David Bowie, The Definitive Biography by Paul Trynka.

I’ve been listening to a lot of playlists on Spotify. Everyone in Artistic Planning has made their own playlists which we shared with each other. We have very different tastes! I’ve been playing the 30-day song challenge on Instagram with my friends from Aberdeen (where I grew up) with the plan being that our songs will make up a mega playlist which will be the soundtrack to our first get together when this is over . I’ve also been going through Robbie Williams’ back catalogue and re-watching films that I love. The other day I binged on Oceans’ Eleven, Twelve and Thirteen. I think Eleven is probably superior. I’ve also really been enjoying a programme on BBC Two called Race Around the World and BBC One’s drama The Nest set in Glasgow.

From student to staff, this September will be my twentieth year! I arrived in 2000 to study clarinet and I’ve never really left. I’ve seen many changes throughout this time including the name, as it was still Royal Scottish Academy of Music and Drama during my time.

My music teacher suggested I applied. She studied clarinet here too. I studied with John Cushing, Maximiliano Martin and bass clarinet with Heather Nicoll. I did both my undergraduate and my postgraduate degree at RSAMD and graduated in 2007, only to start working a few hours a week as the RSAMD’s Scottish Institute for Enterprise’s representative. I did this while I was playing with my chamber group for Live Music Now and teaching. 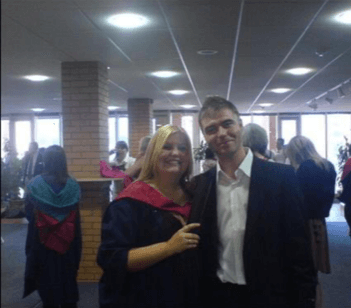 Gemma on her graduation day with her brother Jamie

Eventually I started helping out doing some admin in the orchestral studies department to cover for illness and then to cover someone’s maternity leave. I then moved into a Programme Support Administrator role in the Academic Administration and Support office before getting a newly created job as the Music Ensembles Coordinator and eventually Music Ensembles Manager when the Artistic Planning department was formed. Interestingly, when I did the orchestral studies admin, I worked in the School of Music office, which is now the Artistic Planning office!

One of the things I love the most is working with the students and seeing what they achieve throughout their time at RCS and how they grow as people and musicians. My favourite part is hanging out backstage before/during concerts as you really get to know them and their interesting backgrounds.

The other thing I love is working in the Artistic Planning team. Everyone brings something unique to the table and they’re an interesting bunch to work with. They are also some of the funniest collection of people when together. Some of our team meetings can just descend into hysterics. I can genuinely say I’ve cried so many tears of laughter in that office! We’ve done some amazing projects together and that wouldn’t happen without the hard work everyone puts into it.

The performances. Whether that be a one-off concert, a series of concerts, a big project with lots of logistics involved or a festival, it’s always really satisfying to get to the performance or performances and see all the work come together and I’m reminded of why we do what we do and work so hard.

I think we all know that RCS does not do a typical day! That’s one of the reasons we love it, right? Most days for me though will begin with the realisation that I haven’t washed my coffee cup and the dilemma facing me is whether to go downstairs to the staff room to clean it or whether to just risk it and hope the café bar guys don’t judge me too much!

Each day there are usually rehearsals for upcoming concerts and part of my role is making sure these go smoothly and everyone is where they should be and have everything they need. It’s not uncommon for there to be several rehearsals all starting at the same time in different rooms within the building. Wearing trainers is a must so you can speed through the labyrinth of RCS in time for the next rehearsal starting! Concert days are quite hectic and again, it can be quite normal to get a concert started then dash to another room to start a rehearsal for something else before coming back to the concert for a stage change or something like that.

A typical day at the moment is nowhere near as busy or as frantic and involves a lot more sitting at my desk, so I’m getting used to this new way of working by doing some jobs round the flat to get me away from my computer. I took an afternoon off and attempted a bit of DIY. I realised that I lack the knowledge of how to use a drill even though I own one. I was advised by my other half that trying to learn to use a potentially dangerous power tool probably wasn’t the best idea during this time and for once I agreed and stepped away from the drill (but when this is over, I really want someone to show me how to use it!).

Although no-one in my family was a musician, we always had music on in our house and my dad in particular listens in depth to music. It’s not just something he has on in the background. He wants to know what the song’s about, he wants to know the lyrics and he’ll pick up on really interesting sounds and I guess that’s just how I instinctively listen to music too. I did the usual playing the recorder at primary school, and I had some piano lessons early on, but my love of playing music came later at secondary school when I started learning the clarinet.

This probably won’t surprise some people but I was actually really into drama more than music to begin with. I was in lots of plays and musicals and my favourite role was playing Eliza Doolittle in My Fair Lady, which at 15 years old, I did in a complete Cockney accent. I used Martine McCutcheon as my inspiration who was Tiffany in EastEnders at the time!

The Artistic Planning team will testify that I do enjoy belting out a show tune and myself and Rosie Munro (External Engagements Coodinator) did a full performance of Cell Block Tango from Chicago on karaoke at our AP Christmas night out. I don’t know if this is true, but you know, I heard some people described it as evocative, magical and moving …

It was one of the best times of my life. The teaching itself was incredible. Intense, focused and made to measure, I guess. Also in terms of visiting musicians, the kind of artists they were (and still are!) bringing in to RCS to work with students, is just incredible and I’m a bit sad to admit I definitely took that for granted at the time and didn’t realise how amazing it was.

Don’t worry about what others are doing (or not doing), just focus on your own path. Just do you! Don’t look backwards, you aren’t going that way! I’d also tell myself to not take life and all the experiences that come with it for granted. Oh and I’d probably tell her that red and gold hair glitter highlights applied by a mascara wand are not a good look.

My first clarinet teacher was a major influence. I didn’t really know what I was doing, I was handed a clarinet and just went to lessons and practised what she asked but her encouragement and enthusiasm is the reason I continued. She also got me set up with piano lessons with her mum when I discovered I needed piano as a second study to get into RSAMD. I nearly gave up completely though. I went to quite a rough school and playing the clarinet wasn’t very cool, you see!

There came a turning point when I wasn’t practising anymore and I could see the disappointment on my teacher’s face and my dad said to me, ”˜Hen, if you just want to stop lessons, that’s okay, but you’re using a school instrument that someone else might want to play instead’. I was absolutely horrified at the thought of giving it back, so I started practising again and the rest is history!

It won’t surprise anyone in Artistic Planning that I’m going to mention India. In 2014, fifteen students (thirteen music and two film) had the opportunity to go on tour with the BBC Scottish Symphony Orchestra to India and I was lucky enough to go with them. We visited Chennai, Delhi and Mumbai and it was hands down one of the best experiences of my life. 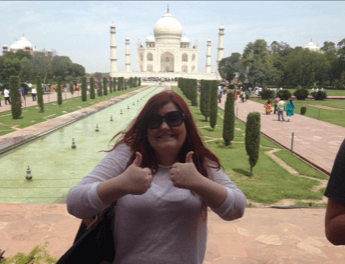 Gemma at the Taj Mahal in India

On our day off, we visited the Taj Mahal and that’s something I’ll never forget. It was surreal just being there and I don’t think I would have ever visited had I not been there on that tour.

There are so many but a stand-out moment would be when we did Phil Cunningham’s Highlands and Islands Suite at Celtic Connections in 2017 for its twentieth anniversary. We had around two hundred musicians on the stage of Glasgow Royal Concert Hall. A symphony orchestra, a huge choir, traditional musicians, soloists including Phil Cunningham himself and a host of other guest musicians. And to top it off, just a casual ELEVEN Highland bagpipers. I’d never heard anything like it before, and I haven’t since.

Look after yourselves and your families and just continue being the fantastic people you are and I’m looking forward to seeing you all when this is over.

Read more about Artistic Planning and meet the team in the latest issue of Review, the RCS magazine