The Green Room is a new blog series from the research community at the Royal Conservatoire of Scotland. It’s both a response to the impact of Covid 19 on the arts, and a way of starting new conversations about the future. Each week colleagues will share their personal reflections, insights, challenges and hopes as we begin to map out our next steps together.

Performance in a Pandemic

Interim Head of CPP and Lecturer in Research

An article I had published earlier this year opens with the line “Performance as an art form is live, ephemeral, and of the moment” (Cultural Geographies, April 2020). Are these words still relevant in the context of this global pandemic?

As a performance-researcher I am keen to examine the way in which contemporary performance-making responds to social, political, ecological and cultural events. I have previously written about the flurry of creative activity which was provoked by the Scottish Referendum in 2014 (Bissell and Overend, 2015) and the way in which performance became a site for debate and dialogue alongside various political events including the EU referendum and a General Election (Bissell, 2019).

The article I cited from initially uses case studies of live performances which happen on tidal spaces to explore ideas of memorialising. Since the government guidelines for quarantine started on the 23rd March, I haven’t been to a coastline or seen a live performance. What I have witnessed is performance-makers responding to the challenge of how to make art in a pandemic, both practically, since the “art of assembly” discussed by Nicholas Berger is no longer possible, and also conceptually, as themes of isolation, connection, communication and community permeate the work.

I may not have travelled beyond my own home and certainly not to a coastline, but the site-responsive nature of my enquiries is not completely redundant. I have come to know my own home very intimately and in different guises. It is now my workplace, my daughter’s nursery, my bar, my restaurant, my social space, sleeping space and performance space. It is a place where I am audience now.

If performance is “live, ephemeral, and of the moment” as I confidently claimed a few months ago, how do each of those defining terms stand up to scrutiny in this current context? Firstly, there is no “live”, or certainly not as we understood it previously. What there is instead is the mediated live, a performer, in their space, while I watch them remotely in my space in real time. The invitation to watch their live action remains the same, however, physical proximity and a sense of shared physical space is impossible. With this, the complex transaction of audience and performer must be reconfigured, the subtle shifts in body language and the lingering eye-contact which has been so vital to nurturing connection, intimacy and trust, has been disrupted by the screen.

When I called performance ephemeral, I was thinking of Peggy Phelan and Philip Auslander’s debate about whether live performance is a fleeting, once-in-a-moment experience, “its only life is in the present” or if mediation can also be considered a part of the live; and, as Auslander claimed “live forms have become mediatized.”

I said that performance was “of the moment”. This concept moves away from having temporal significance and can be considered literally. The performances being developed over digital platforms just now are of the moment in fact, they are distinctively and uniquely of this moment. The context of quarantine and self-isolation is demanding that performance changes, in some ways quite radically, in order to exist. It is of the moment because unlike previous social or political situations that might shape content of work, the global pandemic has completely shifted the context, forms and mediums in which we can work.

Seminal companies such as Forced Entertainment, largely theatre-based, have moved to the digital platform of choice, Zoom, to critique and question how we connect in this new online forum in their three part series End Meeting for All. Artistic Director of Gateshead International Festival of Theatre (GIFT), Kate Craddock, took the bold decision to move the entire festival online (1-3rd May). One of the stand-out performances of the festival was Icelandic artist (and CPP directing mentor) Gudrun Soley Sigurdardottir’s live performance Elision, amended for a digital platform. Its themes of isolation and division originally responding to her experience of living in the UK during Brexit took on an added resonance in this time of isolation.

I argued in my doctoral thesis, that, as artistic director of Belgian company CREW Eric Joris claimed, technology can be a way to regress rather than progress. He uses the term regression without negative connotations, instead implying that technology’s greatest gift might be its capacity to remind us of a more embodied way of being, a means of heightening the senses so we can return to a recognition and an awareness of our corporeal being. It has not always felt like this in these months of constant screen time, but there is a lot we can take from this current moment in terms of our understanding and appreciation of the live. The definition of “contemporary” is “existing or happening now”, and in my capacity as a scholar of contemporary performance I will interrogate the impossibility of the live, the differently live, the new demands of audiences and performers as we navigate this moment. What will performance be after this? What will it look like? How will it feel?

These questions offered a framework for the Contemporary Performance Practice Propel festival which took place from 3-12 June 2020. Propel showcases work from all levels of the BA (Hons) Contemporary Performance Practice and is the culmination of all of the performance-making processes of the academic year. In 2020, for the first time, due to the lockdown restrictions, the Propel festival was presented as a festival of digital performance and was performed over various online platforms including Zoom, Zoom Webinar, YouTube Live, Instagram, a website, chatroom, and even a live performance over the phone. Final assessments for modules such as Re-Imagining Classic Text, Choreography, Performance Writing and Artist Commissions in Directing, Site-specific Practice and Arts in Inclusive Practice were shared online over two weeks, supplemented with artist talks and a final Contemporary Performance Critical Encounters event. The student (and staff) learning this term has been not only how to offer our curriculum online, but actually how artistically we can create new work online. The platforms available are not designed for creating performance, but students quickly adapted them and used them for this purpose. Did the festival feel “live”? I hope so. It was ephemeral as it is now over (although we do have documentation of the work) and Propel was certainly of this moment. The global response to George Floyd’s murder meant we opened the festival a day late and many of the events suggested ways of donating to anti-racist causes in support of the Black Lives Matter movement.

Oh, and I also “visited” a coastline via Maddie Granlund’s Further Down the Beach, part of a diptych of site-specific works called A Site Seen From Within and Without alongside Craig McCorquodale’s Intervals. While there is a sense of grief and anxiety for what is being lost at this moment, I am also immensely energised and excited about what a new generation of artists can do to respond to what is happening in the world and to help us understand it, question it, mourn it, celebrate it, and learn from it. What else is art for? 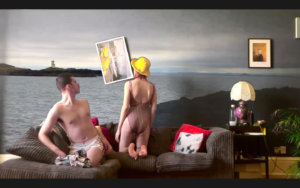 Bissell, Laura “There Is Such a Thing: Feminist Mimesis in Contemporary Performance in the UK” Contemporary Theatre Review Volume 28 Number 4, 522-536, January 2019.

Forced Entertainment End Meeting for All 2020