When soprano Ruth Hoare steps on stage at the Royal Albert Hall tonight, it will be one of her most poignant performances yet.

The Royal Conservatoire of Scotland student will sing in the world premiere of a new piece, The Great War Symphony by composer Patrick Hawes, which commemorates 100 years since the end of the First World War.

The concert, hosted by Classic FM Live, will have extra significance for Ruth whose great-great uncle died in combat the day before the Battle of the Somme. Movingly, his violin, which has been passed down the generations, will be played by a member of the Royal Philharmonic Orchestra. 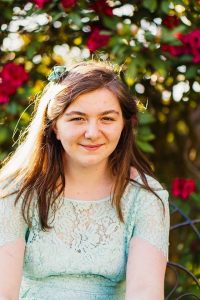 The Great War Symphony will be performed by the Royal Philharmonic Orchestra and a massed choir of singers alongside soloists Louise Alder (soprano) and Joshua Ellicott (tenor).

Ruth, who is in third year of a Bachelor of Music degree at RCS, is part of the National Youth Chamber Choir.

“My great-great uncle Herbert ”˜Bertie’ Simmons was 18 when he died in a diversionary battle at Richebourg l’Avoue in France the night before the Somme on 30 June 1916,” says Ruth.

“Bertie, who was my grandmother’s father’s brother, was an amateur violinist and his violin was passed down the family. We’re all really honoured that we can play a small part in sharing his story. My granny has always said that we are just one family, there are so many more like us, so the concert is an opportunity to remember all those lives, which haven’t been forgotten.”

Bertie’s violin was sent to the Royal Philharmonic Orchestra a couple of weeks ago.

“The violin was a big part of Bertie’s life and he wanted to be a professional violinist. I’m looking forward to hearing it being brought to life at the concert. It’s something tangible and will be a lovely legacy to Bertie, showing that something about him as a person hasn’t been lost.”

Ruth, will perform in the entire concert, which features a mix of repertoire, and will be cheered on by her family.

“My mum and aunt both learned to play on Bertie’s violin. My aunt is an amateur violinist and performs in a local orchestra. While she doesn’t use the instrument, she uses the bow. My granny, her brother and my aunt are coming to the concert … I think it will be an emotional evening.”

As well as the concert, Ruth also features on a recording of The Great War Symphony which was released on CD last month, with all proceeds going towards the SSAFA, the armed forces charity.

Applications are open for two new fully funded music modules at the Royal Conservatoire of Scotland, specifically created for teachers. Available from January next year, Exploring Responsibility of All Through Active Music Making aims to support primary school teachers while Music Technology in Secondary Schools will be taught by RCS lecturers and offers General Teaching