From hotly tipped bands in tiny bars to global artists on arena tours, Glasgow is alive (and kicking) with the sound of music. You can soak up everything from rock, blues, trad and jazz to indie, electronic, classical, and much more, in this electrifying city and scene that beats to its own special rhythm.

And while things may feel muted right now, Glaswegians’ love of live music will never fade.

The UK’s first UNESCO city of music in 2008 and named the UK’s top cultural and creative city by the European Commission in 2019, there’s something for everyone in Scotland’s music capital.

So, as we celebrate Music Spotlight Week at the Royal Conservatoire of Scotland, we shine a light on what makes Glasgow one of the world’s top gig-going cities.

In 2008, Glasgow was named the UK’s first UNESCO City of Music. One of its immediate goals was to encourage collaborations between Glasgow’s performers, music organisations, festivals, promoters, schools and colleges, and their colleagues, in the other UNESCO Creative Cities and this remains an ongoing aim.

Glasgow is a cultural powerhouse so it’s no surprise that so many national arts companies have made the city their home. The Royal Scottish National Orchestra, BBC Scottish Symphony Orchestra, Scottish Opera, National Youth Orchestra of Scotland and Scottish Ensemble can all be found here. And, of course, there’s Scotland’s national conservatoire — that’s us!

Why have so many arts companies chosen to base themselves in Glasgow? Stuart Harris-Logan, Keeper of Archives and Collections at RCS, explains: “The increase in social mobility and the expansion of the middle classes in late-Victorian Britain meant that there was more money to go around. Glasgow already had a rich musical and performing arts history — we have the world’s oldest surviving music hall in the Britannia Panopticon – and was once home to more than eighty theatres.

“With a larger population than any other Scottish city due to the industrial and mercantile expansions and our easy access to world shipping routes (not to mention the fact that one in three boats in the world were at one time made on the Clyde), we were able to support these.”

I belong to Glasgow

What is it about Glasgow that has birthed some of the world’s biggest and best bands and artists?

Some of the most influential musicians found their groove in Glasgow. While a few may have sprouted in the suburbs or surrounding areas – East Kilbride’s Jesus and Mary Chain and Aztec Camera, Paisley’s Paolo Nutini and Bellshill’s Teenage Fanclub, for instance – they have all cut their teeth on the city’s live scene.

Who have we missed? Tell us your favourite band and most memorable Glasgow gig. Drop us a line at communications@rcs.ac.uk

Feeling the floor bounce in the famous Barrowland Ballroom or being packed shoulder-to-shoulder in the 300-capacity King Tut’s Wah Wah Hut. Bands and artists have long considered Glasgow an essential stop on UK, European and international tours. There’s no audience quite like a Glasgow crowd, who will raise the roof wherever they may be.

With its iconic neon sign illuminating Glasgow’s rain-soaked streets, the Barras has long been a beacon in the city’s East End, enticing generations of music lovers. Read about its history on its website and check out People Make Glasgow’s blog on six things you didn’t know about the Barrowlands.

Watch Texas perform with the BBC SSO at the Barras in 2017 via BBC Music.

King Tut’s Wah Wah Hut, or Tut’s for short, may be small but it has a mighty reputation. Playing here is a rite of passage for every homegrown band — and visitors too. It’s where four young upstarts from Manchester turned up one night and demanded to be added to the bill. It worked out pretty well for them – Oasis went on to supersonic superstardom.

Blur, Radiohead, The Verve, Manic Street Preachers and Beck were just a few of the acts who played Tut’s in the 1990s. This timeline charts its history from its inception in 1990.

Radio 1 named it the ‘UK’s Best Live Venue’ three years in a row and it was voted seventh in New York Magazine’s ‘Follow Your Bliss List’ – a list of fifty euphoria-inducing destinations to visit before you die.

When the world’s biggest stars come to town, think Beyonce, Taylor Swift, Justin Bieber, Fleetwood Mac and The Who, they grace the stage of The SSE Hydro, consistently ranked in the top ten arenas globally alongside iconic venues like New York’s Madison Square Garden and The O2 in London. 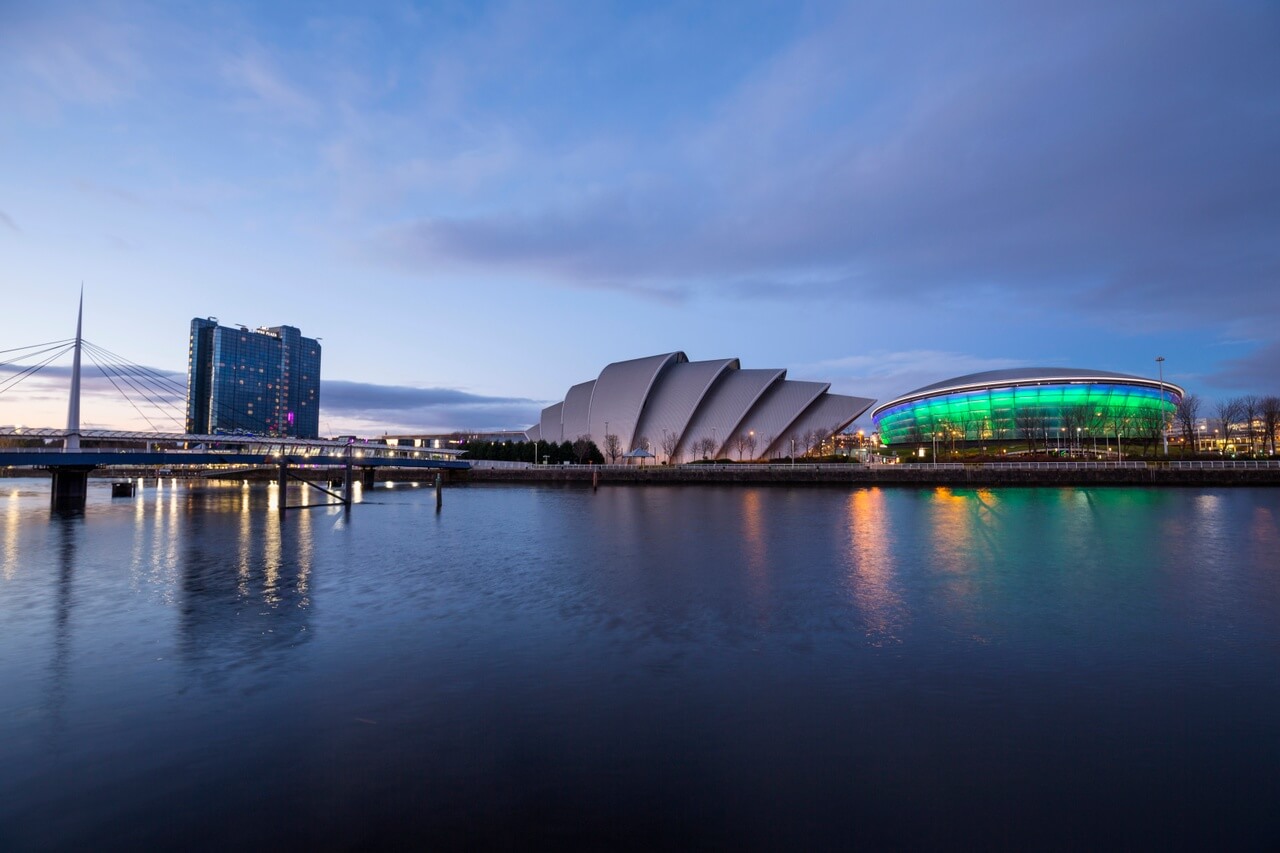 With a maximum capacity of 14,300, it’s the only UK venue of its scale built specifically for live entertainment and is the largest venue in Scotland, augmenting the SEC’s existing facilities. 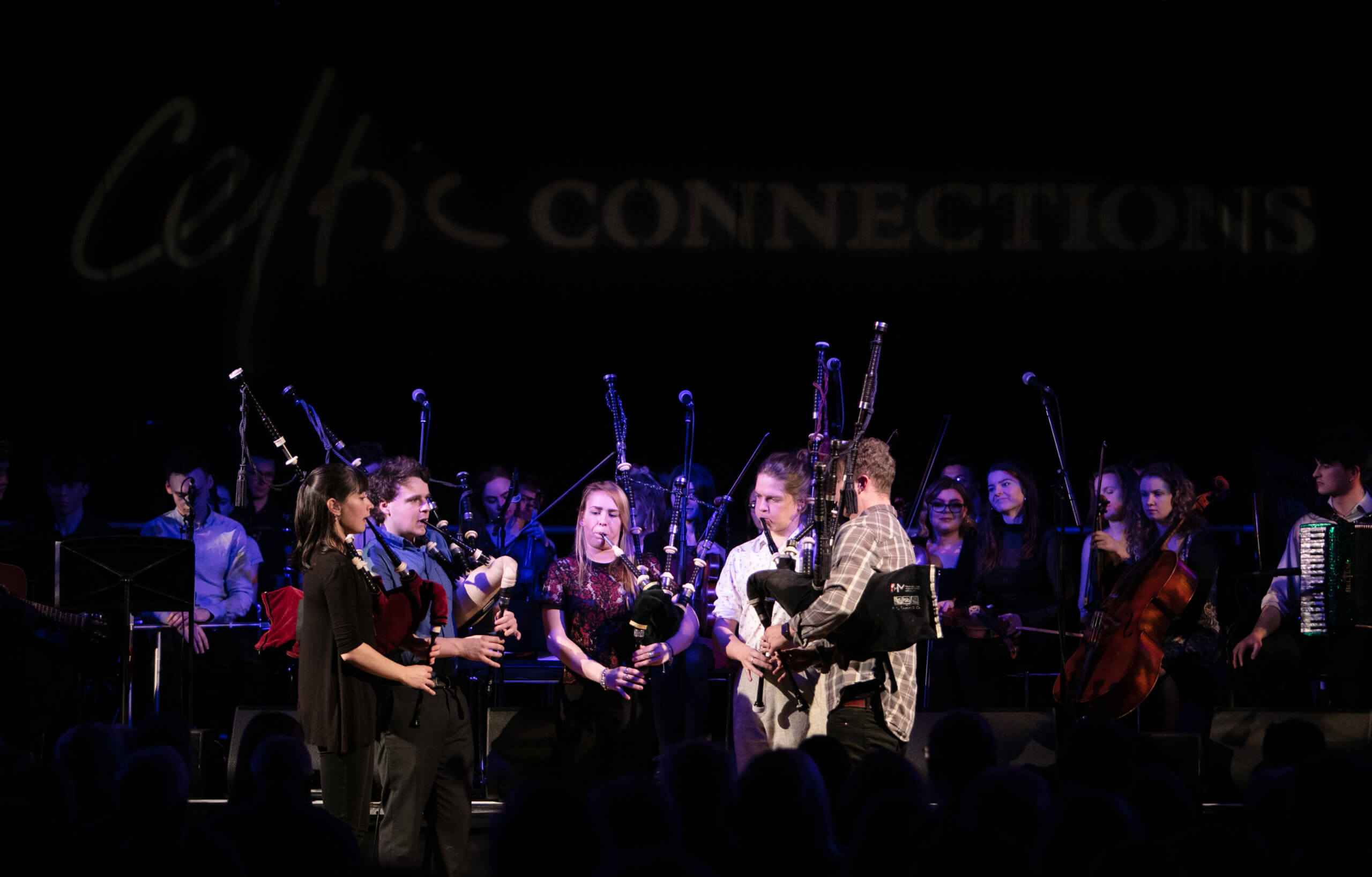 Kelvingrove Bandstand and Amphitheatre is the perfect setting to soak up your favourite sounds on a summer’s night. Restored to its original glory in 2014, it has welcomed the Glasgow 2014 Cultural Programme and a concert series that featured the likes of Sir Tom Jones, Brian Wilson, Van Morrison and Fleet Foxes.

Glasgow certainly isn’t short of places to treat your ears to all kinds of aural pleasures and other venues of note include the Clyde Auditorium (Armadillo), The Hug and Pint, Nice N Sleazy, Mono, The Cathouse, Oran Mor, The Glad Cafe and the National Piping Centre.

Stroll the streets with Glasgow Music City Tours to find out more about the city’s legendary venues. You’ll even swing by RCS on the Music Mile tour — give us a wave!

Tune in from home

Our friends at People Make Glasgow have compiled a guide to enjoying music from the comfort of your own couch. Oh look — we’re even in there too!

We launched RCS at Home on 23 March, three days after the RCS campus closed due to the Covid-19 crisis. Since then, it has become a platform for the RCS community to connect, converse, share work and celebrate achievement.

Thousands of viewers from around the world have tuned in to view an eclectic performance programme that has taken in everything from opera and traditional to brass and jazz.

Rich musical history of the Royal Conservatoire of Scotland

We have been teaching the performing arts in Glasgow since 1847. The Royal Conservatoire started life as the Glasgow Athenaeum in 1847 and for the first 39 years, only offered music classes. We have grown to be one of the most interdisciplinary and collaborative institutions in the world, consistently recognised as a global leader in performing arts education.

Take a look at our Archives and Collections for more on our fascinating history.

Chopin’s penultimate concert was in Hutchesons’ Halls (now a restaurant on Ingram Street) in 1848,” says Stuart Harris-Logan, RCS Keeper of Archives and Collections. “It was a few doors down from our original premises in the Assembly Halls, and took place the year after we opened.”

In 1892, the founding institution of the Royal Conservatoire appointed its first professor, Emma Ritter-Bondy. Not only was Emma the first to be bestowed with the title at the Glasgow Athenaeum School of Music, but she is also believed to be the very first female professor of a UK higher education institution. Read more on Professor Bondy.

“Henri Verbrugghen was our first Head of Strings, appointed in 1893. He founded the Sydney Conservatorium in 1915 – a post he took up after being head-hunted from us,” says Stuart.

“The UK Premiere of Mozart’s Idomeneo was given by the Glasgow Grand Opera Society in 1934, masterminded by one of our alumni Erik Chisholm,” says Stuart. “Costumes were made by The Glasgow School of Art students and many of the parts went to ours. Chisholm also gave the UK premiere of Berlioz’s Trojans in 1935 with the same set-up.”

The premiere of Hindemith’s Wir Bauen Eine Stadt in November 1930 was staged by our junior academy.

Our Archives and Collections has the Coronation manuscript music for Queen Elizabeth II and her father George VI by our then Principal, Ernest Bullock.

Correspondence from Ezra Pound, Sonheim and Sibelius resides in Archives and Collections.

We own one of only three known surviving trombones to be made by Adolphe Sax (inventor of the saxophone) as well as Sir Malcolm Arnold’s trumpet.