Writing, devising, producing and performing a new play in the middle of a pandemic was never going to be an easy task. In 2020, the final year students of BA Performance in BSL and English worked with playwright Douglas Maxwell to create something new, something unique, for their audience.

Chris Willshaw caught up with students in the midst of rehearsals in October 2020 to find out how they were enjoying being on stage again and how they are making the most of their final year at RCS.

In December 2020, students from the groundbreaking BA Performance in British Sign Language (BSL) and English degree programme, in collaboration with Solar Bear theatre company, took to the stage at the Tramway Theatre to bring the premiere of Douglas Maxwell’s dark gothic play, The Assumption to life.

The Assumption began as an idea for an energetic action thriller but then Covid-19 changed everything and Maxwell and director Jonathan Lloyd were forced to reimagine the play with restrictions and social distancing measures in place. What emerged is a dark thriller set during World War 2 on an isolated Scottish country house where secrets lurk behind every corner.

The play was filmed and broadcast online, earning rave reviews.

“Some of the actors speak, some use BSL; but the film is so beautifully put together, with subtitles throughout, and the acting is so strong, that the two means of communication soon blend into an irresistible narrative.” Joyce McMillan, The Scotsman

Benedetta Zanetti plays Mama K and hails from Italy. She chose to study BA Performance because of the provision for deaf people. “I wanted to explore the deaf side of myself”, she says smiling widely.

“The rehearsal process for The Assumption was quite different from any other. Initially it felt like we were going very slowly because we weren’t living in the rehearsal space eight hours a day, however I am relieved to acknowledge that the director knows perfectly what he’s doing! We put together a run of the performance and that felt really nice. We are on this journey at different times but we will get at the same destination together so that’s all that matters.” 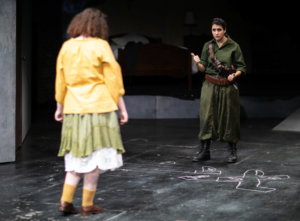 Benedetta Zanetti on stage at Tramway

Irina Vartopeanu (Theresa) moved to Glasgow to study at RCS from Romania, following in the footsteps of BA Performance graduate, Petre Dobre:

“I feel like I’m learning a lot – the translation process from English and learning how to turn that into British Sign Language and, visually, how to find the emotion and the stress and the tension within the character and collaborating with other people and all the different characters in the play. It’s been beautiful.”

There’s a real sense of enthusiasm among the students and a collective desire to make art in uncertain times. Despite all the restrictions in place they wanted to turn those barriers to an advantage. Claire Wetherall, who plays Maria, sees the positives in the situation.

“It’s actually been more interesting because of coronavirus because before we’d have been much closer together, it would have been much more naturalistic, but now we’re using space in a completely different way and taking in the audience in a different way, and we’re adapting our skills. We have to. I think it’s another good skill to be added into what we’ve already got.

“Obviously coronavirus shut down a lot but being able to be in a room, so ready and so open and working towards the same thing … and even though it is a scary time, everyone’s just 100% committed which makes it an amazing experience.” Emery Law

Emery applied to study on the course after observing a class and being impressed by the energy and commitment of the students and the way lecturers interacted with them.

“What I like most about studying here is the opportunity for collaboration so at the end of first year we had a week where we got to meet with loads of students from other departments and just make something together and it was totally free rein. We had been given help before but what we made was totally up to us and that spirit continues throughout all years which I just love.”

Amy Murray who plays the fiery character of Molls, a member of the household staff, has loved the range of modules available to study on the BA Performance programme,

“Visual theatre, I’d say, first of all. I love that. To take off sign language and just look at visually what the story is saying. It feels like you’re really showing your whole self, that it doesn’t have to be focused just on sign language. And I love devising because there’s no rules, nothing. It’s just about starting from one idea and what can spring from that.”

Neil Shand, who plays the pompous Dr. Provan is finding it hard to believe that his three years studying on the programme have gone by so quickly. He would do it all over again if he could, pointing out the unique atmosphere at RCS. 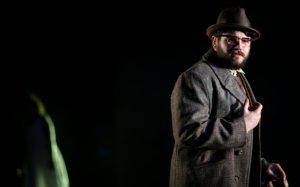 Neil Shand performs in The Assumption

The BA Performance in BSL and English programme only accepts new students every three years, and with a limited number of places available on the course. It is the only programme of its kind in Europe, with a focus on training D/deaf actors for a professional career in performance.

The first cohort of students graduated from the programme in 2018 and have gone to work in television, theatre and film. Graduates have achieved notable success, working with the Royal Shakespeare Theatre and being nominated for Stage Debut Awards.

As this group of students enter their final year of training, they hope to learn as much as they can before entering the professional industry. One thing is certain; they are going to miss RCS.

Amy Helena (who plays Queenie) says of her experience at RCS: “There’s so many things I like – the people, the friendships I’ve developed, the lecturers are all really lovely they’re all really aware of me being deaf so you don’t ever feel like you’re not included. There’s interpreters everywhere so I can just go and be there and do my job because it’s completely inclusive so it makes me feel like I’m at home when I’m at RCS.”

You can watch The Assumption until 10 January via the RCS Box Office and you can also view a full set full set of production images.

To find out more about the groundbreaking degree programme for D/deaf artists, please see the BA Performance in BSL and English degree webpages.