Award-winning musician Jenn Butterworth is one of the UK’s top folk guitarists. A driving force in the vibrant Scots trad scene, she’s also a leading educator who is inspiring the next generation at RCS. From livestreams from her living room to fronting a new campaign for equality in music, she looks back on her year.

Jenn Butterworth is talking about life at RCS when she’s interrupted by a knock at the front door. She apologises as she goes off to answer, a muffled exchange on her doorstep. You can hear the smile in her voice as she comes back on the line: “I’ve just been given a random bunch of flowers and I’ve no idea where they’ve come from.” She looks to see if there’s a note. “Ah, they’re from Artistic Planning (the department that provides performance opportunities for students).“

“What was I just saying, that’s what RCS is about… lovely people.”

Jenn shares the bouquet on Instagram later, a beautiful bunch of autumn-hued blooms sent as a thank you for an online concert she curated for the Scottish Government’s St Andrew’s Day celebrations. Jenn and traditional music students took their tunes into homes across the globe with spoken word from BA Acting students.

“It was a crazy and epic few days recording but it was brilliant fun.”

For someone who spends much of her year gigging or on tour, things looked very different in 2020. Although, a global pandemic hasn’t exactly stood in her way. The St Andrew’s Day concert is one of many online sessions Jenn has performed since lockdown in March, mostly from her home in Glasgow. And, of course, she was the first to kick off the RCS at Home concert series in March. With friend and fellow lecturer Laura-Beth Salter on mandolin, the duo delivered an hour-long concert from Jenn’s sofa which earned them lots of love from their online audience and close to 5,000 views.

“As a freelance – I’m in RCS two days a week – everything dropped off the face of the earth. So I decided to go for it and throw random things at the wall to see what stuck.”

“I made loads of videos. One day I was filming myself throwing paper airplanes outside Kelvingrove and one of my pals walked past and was like ‘what are you doing?!’ Online streams have been pretty good, I made some weird pop covers and I’ve been trying to do things with lots of different musicians.”

Jenn was nominated for Musican of the Year at the MG Alba Trad Awards in December and, in the lead up to the online ceremony, she performed with Kinnaris Quintet and with fiddle player Ryan Young, an RCS graduate

There’s more to come from her, too. Jenn will perform with her band Kinnaris Quintet at 2021’s digital Celtic Connections. 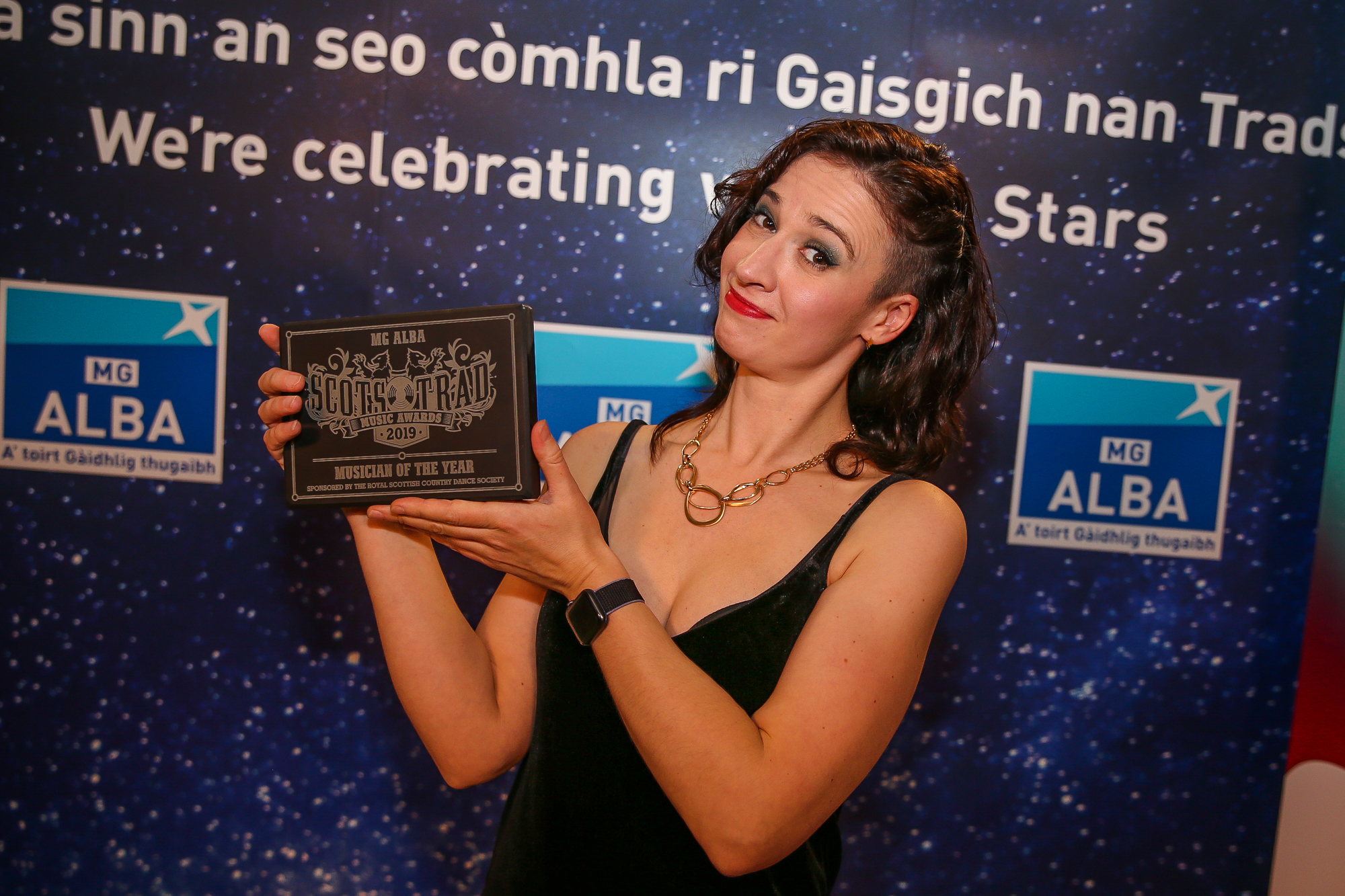 Jenn Butterworth wins the Musician of the Year Award.

It was a double win for her at the Trad Awards last year, where she was named Musician of the Year and Kinnaris Quintet won the biggest award of the night, the £25,000 Belhaven Bursary for Innovation in Scottish Music.

This year also saw her become a figurehead for the #TradStandsWithHer campaign, which is tackling misogyny and abuse in folk and traditional music.

It was launched by The BIT Collective – Jenn is a part of its core committee – which has a mission to discuss and address equality issues in the Scottish traditional arts.

In a video shared on RCS’s social channels, Jenn spoke on behalf of the traditional music department and called out the sexual harassment of female musicians in folk and traditional music, from coercion and assault to casual belittlement, whether in Scotland, Ireland or elsewhere in the UK or the world at large. The campaign supports the promotion of a culture of respect, trust and equality for all traditional musicians and the creation of a safe collaborative environment.

“RCS’s stance had a huge effect on the campaign, people look to RCS as some kind of superpower institution. It’s a place to lean on and it’s fair and open and supportive, which is amazing.”

Jenn’s had to break through lots of women-specific barriers in her career: “Particularly because I play the guitar,” she says.

“I still get told that my guitar sounds great. I do have a really beautiful guitar but it’s actually me playing it.”

She’s learned a lot, and grown in confidence, by working with The BIT Collective: “There is a hierarchy and it’s about breaking it down. It was formed a few years ago when Rachel Newton, a singer and harpist, flagged up an awards ceremony that was very male-centric, you know, the headline band needs to be male and full of testosterone and banging music.

“We thought, someone like Karine Polwart can fill the Concert Hall and deserves to be there, why does it have to be the same male bands on the bill. Rachel started asking these questions and hosted a panel discussion, Exploring Music and Gender, at Celtic Connections in 2017. I was invited to talk about the perspective of being a female musician.

“I was once congratulated on being able to play the guitar like a man. Another time, a man said to me after a gig that he didn’t think it was going to be that great. Why? Because I’m female?”

“We formed The BIT Collective as a way of continuing the discussion.”

Music has been a constant in Jenn’s life: “My dad plays the mandolin, my mum used to play the flute and my wee brother the bodhran. Quite the musical family,” she laughs.

“My dad’s a craftsman and we’d sit in his workshop, making things, and listening to folk radio. He’s a total tune monster, he’s always on about tunes whenever I phone him.”

One of her first musical memories is of her dad playing to her and her brother when they were toddlers: “It was always really special. I also remember doing big car journeys to my grandparents in the north of England. We’d finish school, jump in the car, and I’d be in the back bashing on my toy keyboard, a stupid Disney thing, with my headphones on.

“I was really lucky to have free music lessons in primary school and was offered violin lessons when I was around nine.”

Although, she admits that the classical route wasn’t for her: “I had started playing more trad tunes and listening to all the classics. I remember thinking that if I could only play Spootiskerry, then I would have made it!”

Along with her family, Jenn would join in with local folk sessions in Dumfries and Galloway but she never had aspirations of being a professional: “Music was always around me and I wanted to be a part of it.”

She left home at 17 to do a four-year degree in applied music at Strathclyde University. “It was great craic and Strathclyde and RCS (when it was RSAMD) were the two rival courses. We’d all meet in the pub and it would be ‘ooh, you’re studying on that course, are you’.”

Glasgow was an education in itself and she immersed herself in the city’s trad scene.

“I didn’t go out clubbing, there would be a session every night and for the first few years, I would be in the Ben Nevis playing tunes. It was massive for my ear training and my ability for improvisation and accompaniment. I spent so much time jamming in the pub and experimenting. I’d be playing fiddle and I’d wait until the guitar player took a break before going up to play a couple of tunes. I’d picked up the guitar at home on the quiet and it soon took over.”

Jenn joined RCS in 2009 and her role as lecturer in practical studies focuses on students for public performance. She takes classes in guitar performance and folk ensemble, mentors principal study guitar students and contributes to the day-to-day running of the trad department.

“I’m surrounded by people who are fired up and interested. It’s such an active place and a real community where people are curious and enthusiastic. I love that about teaching.”

Some of her favourite moments have been watching her students rip up the stage at home or further afield.

“I’ve taken them to Celtic Colours International Festival in Canada for the last four years where they have to write an entire show in two weeks with no rehearsals. They write it and when they can play it, they’re ready and it’s like ‘let’s go’. I push them hard because my benchmark for performance is high.

“Every year they get standing ovations and there’s a queue around the block to see their gigs.

“They come back to RCS full of energy and enthusiasm and they can see what can be achieved in a short space of time. It’s like you push them up another level and they come back and spread that around other students.

“There’s also watching them perform at Celtic Connections when you see their reaction to the audience. When you’re on stage there’s a flood of emotion because the audience is totally with you and there’s something so amazing about that.”

Find out more about studying on the BA Traditional Music programme at RCS.