Contemporary Performance Practice student Indra Wilson is helping women across the UK face life during breast cancer and beyond. From creating a support network to publishing a new book, From Them, To You, she tells Linda Robertson why she’s on a mission to boost women’s body confidence and mental health.

There’s a catch in Indra Wilson’s voice as she describes the moment when she saw her book — her debut — for the first time.

“I’d worked on it for so long so to have it physically in my hands was amazing and overwhelming … I feel quite emotional talking about it,” she says.

“It was beautiful. I couldn’t believe it was finally here.”

It was a milestone that marked the end of a journey that began two years ago, following her mum’s breast cancer diagnosis. It also symbolised the start of something new, a glimpse of where the future may take her.

From Them, To You, is more than a book. It embodies empowerment, its pages filled with women’s words of wisdom and guidance, of strength and hope — a ray of light through the darkest times.

It was written by and for women living with breast cancer, to offer practical and emotional advice and inspiration to help them understand their relationship with their bodies after treatment and surgery.

“I asked women to submit advice, the things they wished they’d known when they were going through their treatment,” says Indra, who is in her fourth and final year of the BA Contemporary Performance Practice degree.

“It could be anything — from where to buy non-wired mastectomy bras to a list of creative activities to help them take time for themselves. It could be instructions on how to write a love letter to your body or a poem about body image.”

The result is a beautifully illustrated book that will be gifted to Glasgow Women’s Library, Breast Cancer Care Glasgow, Beatson West of Scotland Cancer Centre and to all the women who shared their experiences.

In just a couple of years, what started as an idea for a dissertation and research module for her Contemporary Performance Practice degree has blossomed into something much bigger than she could ever have imagined.

It began after her mum’s breast cancer diagnosis. Watching her go through her treatment, and recovery, inspired Indra to take action.

“My mum’s diagnosis opened my eyes to the lack of understanding around women’s health and also the aftercare, which can be so short,” she says.

“You have your treatment, you’re done, you should be fine and healthy again. But it’s a massive journey and your body can be completely different. I wanted to do more to help the mental health and body confidence of women who have or have had breast cancer.”

The feedback prompted Indra to set up a private Facebook group, to create what she describes as a ‘buddy system’. Now, women across the UK are supporting each other as they navigate life through breast cancer and beyond.

“I wanted to bring people together who had breast cancer, where they could invite friends or family to join. Every day new people were added to the group and even though setting up a Facebook page seems so simple, it has had such a big impact.

“It conquers head-on the loneliness people might feel, especially when they’ve received this life-changing diagnosis and they don’t know anyone else who has gone through it. They’ve only spoken to doctors who speak to them in medical terms.

“A lot of the women talk about just wanting to hear someone say ‘this is going to happen, and get these bras, and these pillows’. They want more of a friendly approach, someone who has been through it. It’s lovely to watch friendships grow. I hope people have made friends for life through it.”

Indra also staged a peaceful protest in an art gallery to highlight the relationship women have with their bodies post-surgery. 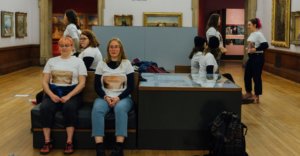 “Female nudity can be seen everywhere, even in things like shampoo and perfume adverts. The women I spoke to for my focus groups said that their bodies don’t look like that, especially if they’ve had mastectomies and have scarring.

“One woman had gone to a museum and her child asked why all the women in the paintings had breasts and she didn’t.”

Indra asked women to send her photographs of their mastectomies, which she printed onto t-shirts. 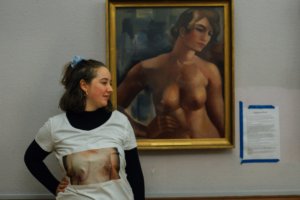 “We sat on benches and talked to people about breast cancer, mastectomies, and the UK health system. I was a bit worried about how people would react to seeing a group of twenty women wearing t-shirts with mastectomies on them in an art gallery but we were met with so much positivity and people were eager to talk to us and learn how surgery could affect women.”

When Indra returned to RCS in September 2019 for the start of her third year, she knew she wanted to take the project further. Dr. Laura Bissell, Interim Head of Contemporary Performance Practice, suggested that she apply for the Carnegie Vacation Scholarship, which encourages undergraduate students to develop their independent research skills. Awards enable students to learn how to manage a research project and prepare for postgraduate study.

The funding allowed Indra to develop From Them, To You, which is published by Glasgow-based Speculative Publishing with illustrations by Jenny Booth, an RCS Production Arts and Design graduate, and poems by Jack MacMillan, a fellow fourth year Contemporary Performance Practice student, who is behind Speculative. Other poets who have shared their words include Christine Howie, Freja Hansen, Hazel Smith, Rachel Louise Smith, Anna Cheung, Hazel Salt and Sadie Maskery.

“I only ever spoke to the team on the phone or over email — they had to listen to me trying to describe how I wanted the book with no knowledge of publishing at all!

“They smashed it, they did a fantastic job and were so friendly — they knew how important it was to me and they handled it with care. I couldn’t imagine anyone other than Jenny doing the illustrations, they’re so delicate and gorgeous.” 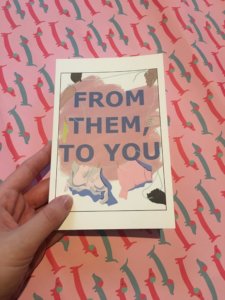 Her mum was also instrumental in its look and feel: “She was such a big part of it and I spoke to her a lot about the visuals. She would tell me what she thought about all the medical pamphlets she received and what was missing, as well as what was appealing — softer colours, a delicate design touch, and human-to-human language.”

Indra has been inundated with positive feedback since the book hit the shelves and her mum, naturally, is proud as punch.

“It has been so lovely, I’ve had loads of messages and it’s opening up more discussions. I’m thinking of doing a second book. I don’t want it to end as I’ve enjoyed it so much. It has gone way beyond a module!”

She credits her Contemporary Performance Practice lecturers, who she says have been behind her every step of the way.

“The best thing about the Contemporary Performance Practice course is that you get to do so much work before you graduate, especially in third year. Laura Bissell is such a good teacher, she asks ‘What is that thing you have to do? What is your passion project? Find it here while you have the help and support from tutors and RCS.’ I really have to thank Laura for how accessible the module and dissertation was, for this to be born out of it.”

So, what comes next?

“Before Covid, I thought a lot about doing a movement workshop for women with breast cancer. Through work I’ve done in hospices and with non-arts students, I’ve realised that even just having a giggle in a dance studio can be of so much benefit. That’s the fun part, asking myself how do I push this now to do more? I know I want to do something bigger. I very much feel like it’s my duty to carry this on as my work, trying to blur the lines between science and art.” 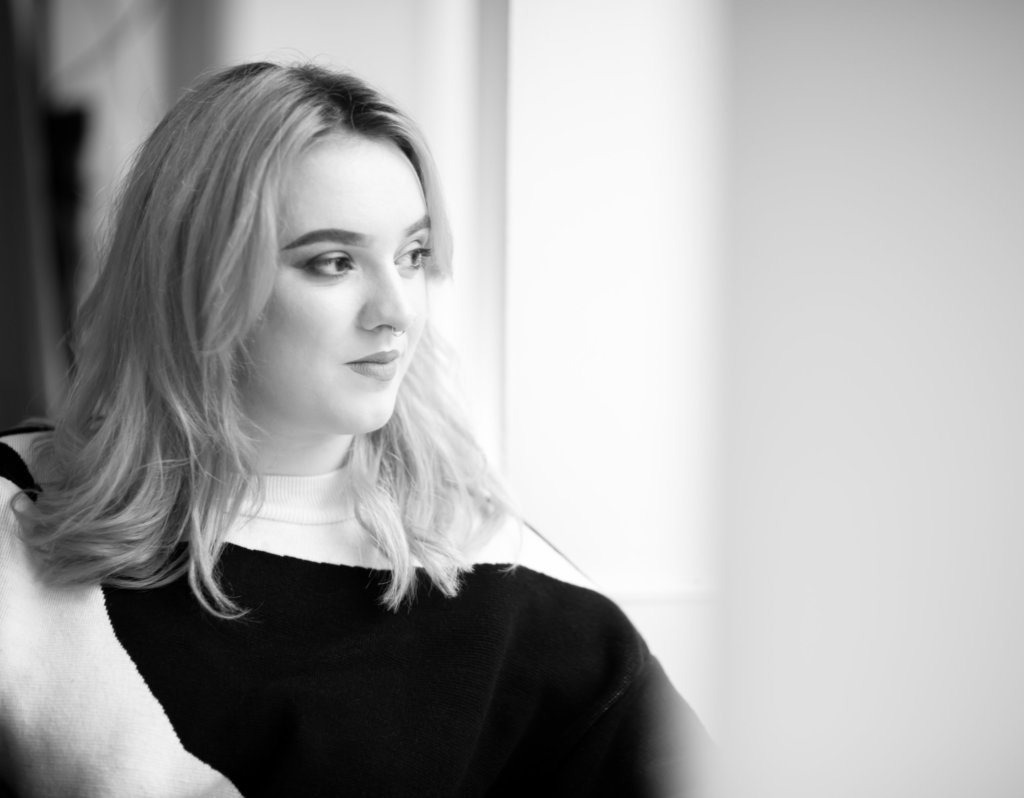