We are still here … and we need you

A cellist stands illuminated on stage. A ballerina moves into position. One by one, lights fade to black, casting the theatre in darkness.

It’s the opening scene of a powerful and poignant new film from RCS – narrated by a global Scottish star of stage and screen — that serves as a stark reminder of the challenges facing the arts in 2020.

Award-winning Hollywood and West End actor James McAvoy – an RCS graduate — voices #WeAreStillHere, a short film that captures the creativity, commitment and resilience of students, staff and alumni throughout the Covid-19 pandemic.

It’s an urgent call to support the future of the arts through a new scholarship campaign, which will ensure that the next generation of artists can follow their dreams.

The film features music from acclaimed pianist and composer Fergus McCreadie, a rising star on the European jazz scene, who is an RCS graduate and scholarship recipient himself.

It’s layered with James’ poetic and stirring vocals that encapsulate how it feels to be an artist at this time.

In the wings, out of the limelight, in position, finding my way.

Searching for meaning, finding a feeling, thought, an expression that I can give to you.

Making that moment for you.

James, who grew up in Drumchapel in Glasgow, is committed to nurturing the creative potential of young Scots and believes in giving young people, who experience barriers to participation and achievement, the opportunity to express themselves through the performing arts.

“At this time, possibly more ever, the arts and artists need to be seen and heard and recognised for the essential contribution they make.” James McAvoy

“We’re still here, as are the next generation. That’s why access to arts education is so valuable and should be accessible to all, regardless of background.

“Scholarship support is vital, to ensure that everyone gets a fair chance and that we have artists for the future who reflect our world, connect us and tell the stories that need to be told.”

Since graduating from the BA Acting programme in 2000, James’ career has taken him from Glasgow to Hollywood with a string of stellar credits across film, theatre and television. Movie roles include X-Men, It, Split, Filth, Atonement and The Last King of Scotland and, earlier this year, he wowed critics and audiences alike in Cyrano de Bergerac in London’s West End.

In 2015, he funded the ten-year James McAvoy Drama Scholarship, which supports applicants who would otherwise find meeting the cost of tuition fees a barrier to accessing pre-higher education drama training at the Royal Conservatoire of Scotland. He is also Patron of the RCS’s Junior Conservatoire of Drama.

“It means so much to us to have one of our own, actor James McAvoy, play a key part in our new scholarship campaign film #WeAreStillHere,” says Professor Jeffrey Sharkey, Principal of RCS.

“As Patron of our Junior Conservatoire of Drama, James is passionate about making the performing arts accessible for all.

“Financial barriers or otherwise should never stand in the way of potential. Our doors are open to the most promising young artists, at home and internationally, to help them fulfil their dreams.” Professor Jeffrey Sharkey

He says there is a ‘unique energy and power’ in bringing different voices and backgrounds together: “Scholarships play a crucial role in making that happen. They enable students from around the world to study here in Scotland, not only enriching their lives but the national artistic landscape.

“The arts are facing an unprecedented challenge but our students are still here, still creating and learning, and using their talents as a force for good. We strongly believe the arts have never been more vital. Now, more than ever, we need to support those whose talents and dedication to their craft will bring us together and give us optimism, comfort and hope.”

Scholarships enable young people from across Scotland and around the globe to study at a world-leading conservatoire and remove the financial barrier or pressures they might otherwise face. Donations may cover either part or the full cost of tuition fees, help with living costs or for essential equipment.

Michael Ahomka-Lindsay is a third-year student on the BA Musical Theatre programme and a scholarship recipient: “Scholarship is ultimately what allowed me to come to RCS. It made a huge difference in just getting me through the door in the first place and I’m eternally grateful for that.” 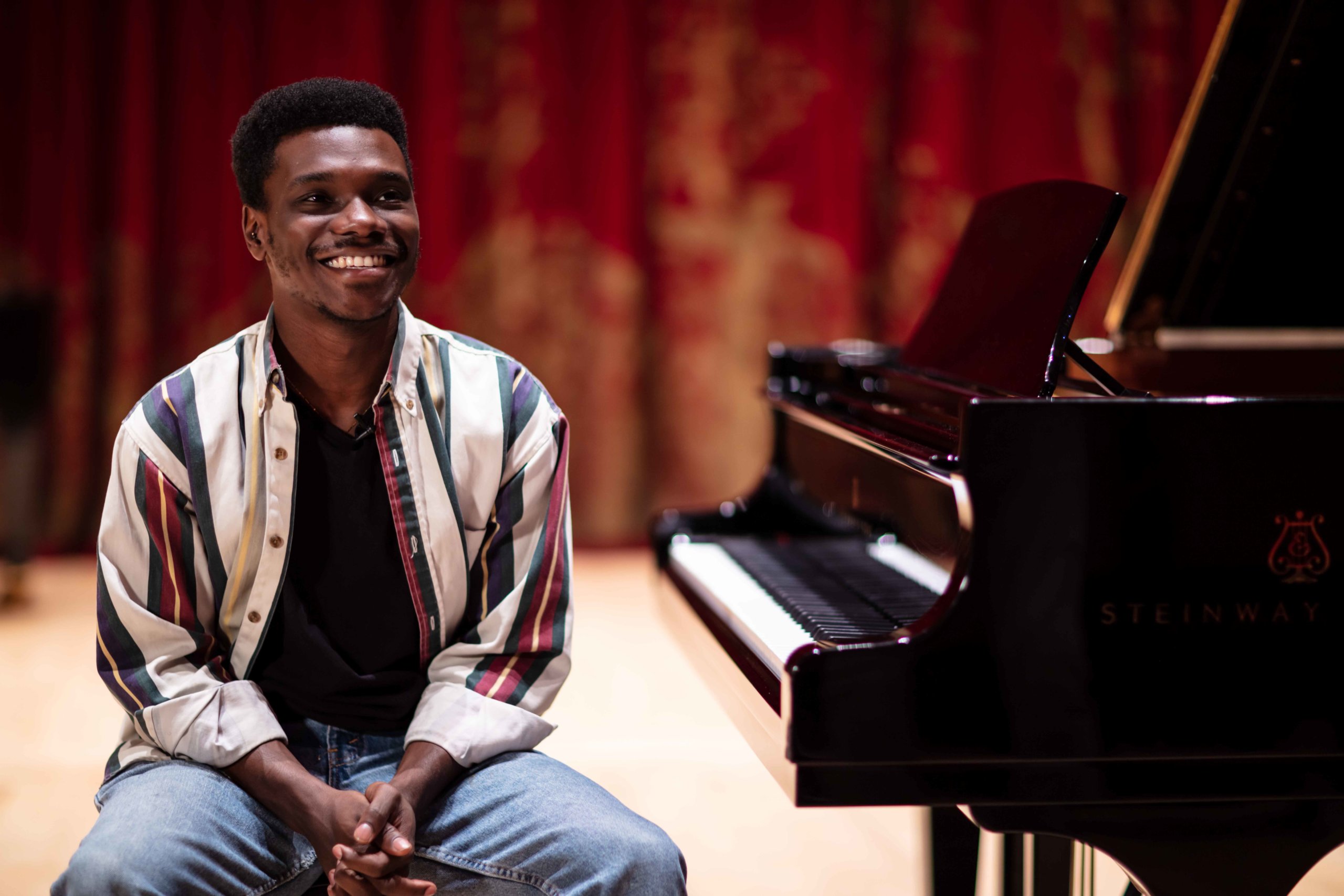 Michael believes those who benefit from scholarships will continue that cycle of giving back: “People who have been the recipients of that form of altruism will tend to pay that forward themselves. It seems a shame for people to miss out on the opportunity to achieve their potential because they might be financially unable to.”

“My message to donors is a massive ‘thank you’. Its down to their kindness that I’m here in the first place and I’m extremely grateful.” Michael Ahomka-Lindsay

Colleen Bell, a second-year BA Filmmaking student and scholarship recipient, says: “I can’t express enough how much I would not be here if it wasn’t for the scholarship. I work part-time and the scholarship has allowed me to reduce my hours so that I can study the thing that I love. I feel this overwhelming sense of gratitude that because of other people, I am here.” 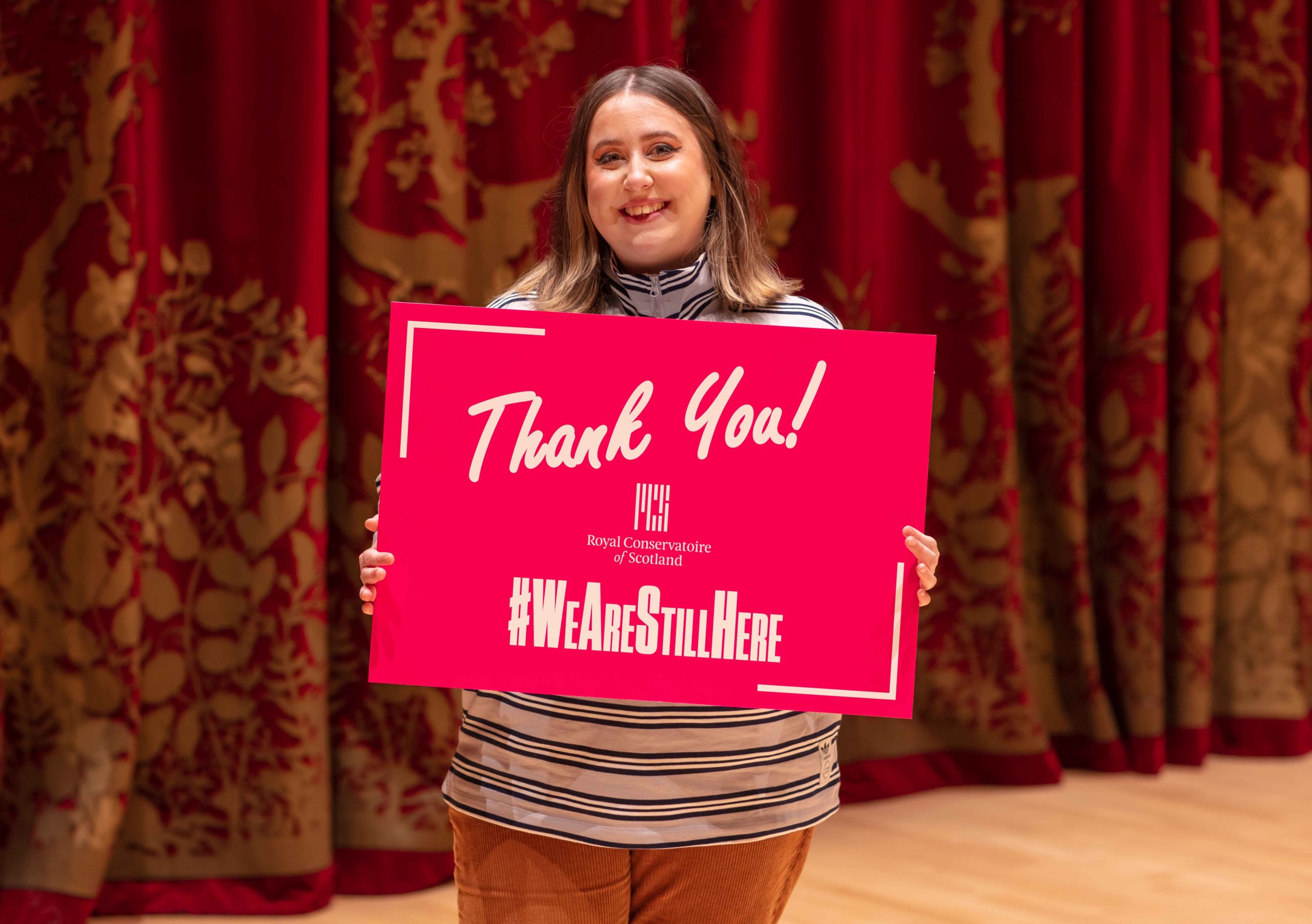 Trumpet player Rebecca Wilson is studying for a Masters of Music after graduating with a Bachelor of Music degree.

“Without a scholarship, I wouldn’t have been able to study for a Masters at all. It has made a huge difference because it has allowed me to continue to have Glasgow as a base while I start to pick up a lot of professional work in the area. To the donors of my scholarship, I would like to say ‘thank you very much’. Without your help, it wouldn’t have been possible for me to get to where I am today.” 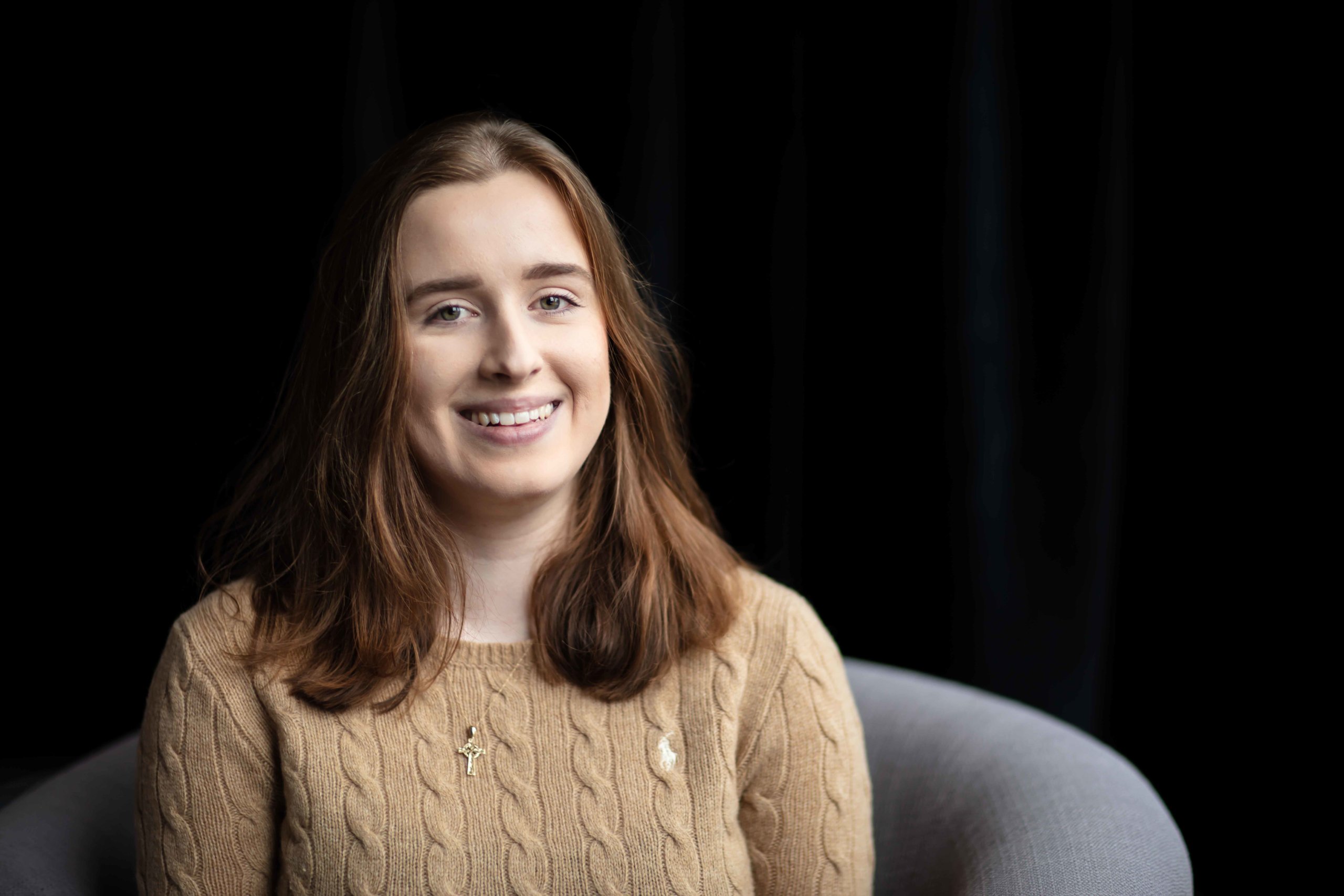 Lucy Vallis, who is studying for a Masters of Music in Opera, says a scholarship has made a ‘huge difference’ to her life and studies: “I’m able to fully immerse myself in my course and can enjoy all the opportunities without having that constant worry about money, and that’s really special.

“Scholarships help to alleviate financial pressures and show that it doesn’t matter what kind of background you’re from. Supporting scholarships means that everyone has a fair chance at having tuition and experiences at this level. ” Lucy Vallis

To support the next generation of performing and production artists trained in Scotland, donate today.