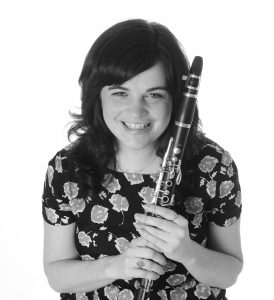 Jennifer enjoys a busy and diverse freelance career. As an orchestral musician she has performed with the BBC Scottish Symphony Orchestra, Royal Scottish National Orchestra, Orchestra of Scottish Ballet, Scottish Opera, Ulster Orchestra and the Albanian Radio and Television Orchestra and has enjoyed regular appearances at music festivals across the UK such as the Aldeburgh Festival, BBC Proms, Celtic Connections, Edinburgh International Festival, Sound Festival and the St Magnus Festival. Her recordings and broadcasts include working with BBC Radio 3, Hyperian, Naxos and Rough Trade Records.

Her love of contemporary music has led to collaborations on the creation of solo and clarinet quartet repertoire with composers Timothy Cooper and Thomas Butler. She is a founding member of the Glasgow New Music Expedition and also performs regularly with Glasgow based new music group, Ensemble Thing.

Passionate about widening access to the arts, Jennifer is a Live Music Now!, Music in Hospitals and Enterprise Music Scotland artist, performing regularly in diverse locations to new audiences across Scotland.

Jennifer has also been known to take to the stage as an actor/musician with Children’s Theatre company, Oak Note and has enjoyed working with Scottish indie-rock artists such as Belle and Sebastian and Travis.

Her work has been generously supported by the Caird Trust, Cross Trust, EMI Sound Foundation and the Scottish International Education Trust.

Jennifer joined the Woodwind Department at the Royal Conservatoire of Scotland in 2017.