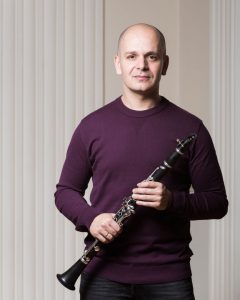 Maximiliano MartÃ­n grew up in Tenerife and studied at the Escuela de MÃºsica de Barcelona with Joan Enric Lluna and with Richard Hosford and Robert Hill at the Royal College of Music (RCM) in London. The Principal Clarinet of the Scottish Chamber Orchestra (SCO) since 2002, he was a prize winner in the Howarth Clarinet Competition of London and at the Bristol Chamber Music International Competition and has performed concertos with the Scottish Chamber Orchestra, Real FilarmonÃ­a de Galicia, European Union Chamber Orchestra, Orquesta de Camara Reina SofÃ­a and Orquesta FilarmÃ³nica de Gran Canaria. He has made his debut as a soloist and chamber musician in many of the world’s most prestigious venues including the BBC Proms and Wigmore Hall in London, Library of Congress in Washington, Mozart Hall in Seoul, Durban City Hall in South Africa and Palau de la MÃºsica in Barcelona.

As a chamber musician, Maximiliano is a member of the London Conchord Ensemble (LCE) and has collaborated with Cuarteto Casals, Christian Zacharias, Julian Milford, FranÃ§ois Leleux, Jack Liebeck and Kris Bezuidenhout. Often invited as a guest principal clarinettist, he has frequently appeared with Chamber Orchestra of Europe, Orquesta de Cadaqués, Bergen Philharmonic Orchestra and City of Birmingham Symphony Orchestra.

Maximiliano is one of the Artistic Directors of the Chamber Music Festival of La Villa de La Orotava, held every year in his home town. He is a Buffet Crampon Artist and plays with Buffet Tosca Clarinets.