It has been hailed as one of the best shows of 2020 and proved a ratings smash for Sky. Crime drama Gangs of London gripped viewers with its high-octane action scenes and fierce family dynamics. RCS graduate Brian Vernel, who plays one of the show’s darkest characters, talks telly, drama training and his not-so-guilty pleasure with Linda Robertson.

Brian Vernel is talking TV and the ultimate binge-worthy box set. We’re in quick agreement that mob drama The Sopranos takes our number one spot.

“Tony Soprano has to be the best TV character ever. How is it that you root for someone, a mafia boss, who you’ve watched kill in cold blood?” he asks.

“Game of Thrones is also up there. I didn’t watch it at the time, which is shocking as I went to youth theatre with Daniel Portman who plays Podrick. I’m on series seven and I’m always texting him saying ‘I’m finally watching it’ to wind him up.”

Brian is no stranger to a telly triumph himself. He’s fresh from Sky Atlantic’s ratings smash Gangs of London with its record viewing figures, rave reviews and the title of Sky’s most-binged box set of 2020.

It revolves around London’s most powerful crime clan, the Wallace family, and the power struggle with their city gangland rivals. Brian plays Billy, a drug addict who is the younger son of patriarch Finn Wallace, who is on the fringes of the family business.

Created by award-winning filmmaker of The Raid film franchise, Gareth Evans and his creative partner Matt Flannery, it’s the biggest drama launch on Sky Atlantic in the past five years and is set to return for a second series in 2022. Not that Brian can give anything away, mind you. So, what attracted him to the role of Billy?

“He isn’t like any of the other characters in the programme,” he says down the phone from his home in London.

“He’s part of the family but a bit of an outcast. There’s a softness and a vulnerability but in some ways, he has a confidence that some of the others don’t have. He’s heavily involved in a lifestyle of drugs and crime that brings danger to him and other people. There’s also an interesting dynamic between Billy and his older brother Sean, who is played by Joe Cole. The programme has so many facets and layers and the way season one was left, it could go anywhere.”

Fans loved its ferocious and fast-paced fight scenes, with one in a pub reportedly taking four days to shoot. “Gareth’s fight choreography is a truly special thing. The scenes have such intensity. I would be sitting there watching with my mouth open.” 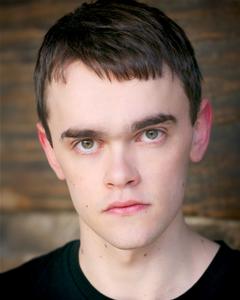 to return home to Scotland. He grew up in Glasgow with his parents and siblings, his older sister — who is a drama teacher — and younger brother, a recent graduate from The Glasgow School of Art.

“I got into drama at high school and went to Glasgow Schools Youth Theatre from 15 to 17 and that was a hugely formative period for me,” he says.

“In sixth year I applied for Scottish Literature at the University of Glasgow but I wanted to do drama. I was too late to apply so I did an HNC at Reid Kerr College, which was amazing. My tutor, Jim McLaughlin, had gone to RCS in the eighties and really encouraged me.

“RCS was always in the back of my mind, I knew I needed to get in. There’s a proper, special feeling when I’m in the building. It’s hard to explain, it drew me in.”

RCS was his first and only choice and he’ll ‘never forget’ the three years on the BA Acting degree.

“I had some laugh, I loved it. Our year genuinely got on which is important when you spend so much time with people. I made friends for life. You also saw the difference between the way you started the year and how you ended and how sharp you’d become.”

Brian already had a few professional jobs in the bag before his training. He was cast in the play Blackout by Davey Anderson at the Edinburgh Festival in 2010 — his first role — which toured the following year.

He worked on the BBC crime drama The Field of Blood along with a couple of theatre shows in his second and third year at RCS.

“I always said to Joyce (Deans, Head of Acting) and Ali (de Souza, Associate Head of Acting) that my first priority was the school, I was buzzing to be there. I chose to go to RCS for a reason and I always put that first.”

Then, on the cusp of graduating, he was offered a part in one of the biggest movie franchises of all time.

“I got a part in Star Wars: The Force Awakens when I was still in third year so it was my first job after graduating. I went to London and had to sign an NDA (non-disclosure agreement). A week or two later, my agent Sophie phoned and said they want to offer me the part and they liked my Scottish accent. I was like ‘no way, man’. I couldn’t believe it.”

Not bad for a first gig — especially when you get to tell Harrison Ford he’s a ‘dead man’ in a Glaswegian accent.

“Nothing can prepare you for something like Star Wars. I only had a couple of weeks on set and it was brilliant. It wasn’t ever like I was carrying a whole movie on my back, that’s another level entirely, but it was amazing being on set and seeing the scope and scale of it. A couple of weeks before filming, the director J. J. Abrams invited me down to see an action sequence being filmed. Then, while filming, we all had to wear cloaks over our heads to get from the trailer to make-up because people were flying overhead trying to get pics. It was nuts.”

“I love Christopher Nolan’s movies so I had a great time on that film. It was high intensity and tough, swimming in the sea for 12 hours a day. If you can do that, there’s pretty much not a lot you can’t do. I felt at the end that I had put my mind and body into it. Fionn Whitehead, who played the lead role, is one of my close pals and it was brilliant to work with Jack as well.”

As well as earning impressive film and TV credits, Brian has also worked extensively in theatre. Productions include Stories at the National Theatre, Instructions for Correct Assembly at the Royal Court, The Seagull at Lyric Hammersmith, Barbarians at The Young Vic and Future Conditional at The Old Vic.

“It was always theatre when I was younger, then it was film and TV because I felt like it was something I needed to learn. There are always nuggets that you pick up on each job and I find that really intriguing.

“I did three plays in a row and after that thought it would be great to do some film and TV.”

“Theatre is a real stamina game and you need to keep yourself in good nick.”

Brian visited RCS last year to talk to students about making the move into the professional world and to answer their questions.

“It’s great to come back, I’d love to direct a play at RCS one day. There was a lot of chat with the students about the final year showcase. I told them that when it came to mine, you can get this idea that you have to fit a bill for a casting director or agent. Sit down, look at yourself in the mirror, and ask yourself what you’re good at and find your strengths.”

What would he say to the actors that will be graduating in 2021?

“Keep a positive mindset and energy. You got into RCS for a reason and if you’re working hard and applying yourself, opportunities will be out there. Keep your ear to the ground too, rather than waiting for someone to contact you.”

His advice for auditions is to try to enjoy them: “I like the excitement of them. I know so many people who are filled with anxiety, especially if it’s a recall. I find it helps if you find a way to flip it to see the positives, like telling yourself you’re getting an audience with people that can help you. That’s not to say you don’t get nervous but it takes the pressure off.”

And always be prepared: “There’s nothing worse than going for an audition or rehearsal and not knowing what you’re doing. When it comes to rehearsals and you find that you’re struggling or not quite hitting it, the one thing that I keep coming back to is honesty — as long as I’m telling the truth. It’s not trying to put anything on, just be authentic and say the words the way they should be said.

“Always focus on it being the right thing at the time and do your best.”

When he’s not working, Brian can be found boxing or playing tennis and his downtime will most definitely involve a different kind of wordplay: “I’m addicted to cryptic crosswords,” he laughs.

“I started on regular crosswords and got to a point where I’d fire through them in two minutes. I picked up a cryptic crossword and thought ‘how do you do these things?’ I’m doing two a day now — it keeps the brain healthy.”